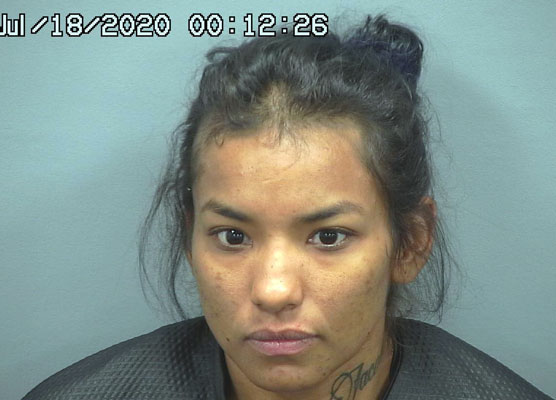 Contributed Photo/Courtesy GCSO: Kristina Sandoval was sentenced to four years in prison on Tuesday for attempted transfer of a narcotic drug.

SAFFORD – A woman who could have gotten as little as a year in jail followed up with probation was given a four-year sentence Tuesday, after performing dismally while on pretrial services.

Saying that he wasn’t persuaded she would be a good candidate for probation, Graham County Superior Court Judge Michael D. Peterson sentenced Kristina Sandoval, 27, to four years in prison on a charge of attempted transfer of a narcotic drug, a Class-3 Felony. The sentencing structure for the charge carries a mitigated minimum sentence of two years in prison up to an aggravated sentence of 8.75 years.

Sandoval reportedly did not fare well on pretrial services, and a warrant for her arrest was issued. She was then taken into custody on July 17.

Prosecutor Garet Kartchner requested a five-year sentence and said that Sandoval had an “utter failure to take responsibility for her actions.”

Kartchner also stated that Sandoval grew up with selling drugs being a normal job for her and as her chosen way to make money.

“She’s not sorry for what she did, she’s sorry she got caught,” Kartchner said.

Sandoval’s attorney, Daisy Flores, argued for probation and Sandoval advised that she wanted to go to rehab for her addiction to opiates. She said she was never offered rehab before, despite having a recorded drug addiction issue for at least six years. She said she previously didn’t try to go to rehab on her own because she didn’t want to have to go through the withdrawal of heroin addiction.

“This isn’t going to be what you want, but I simply can’t have people out selling drugs,” he said.

Judge Peterson then sentenced Sandoval to four years in the Arizona Department of Corrections with credit for 57 days served. He added that he hoped she would take advantage of treatment options upon her release from prison.