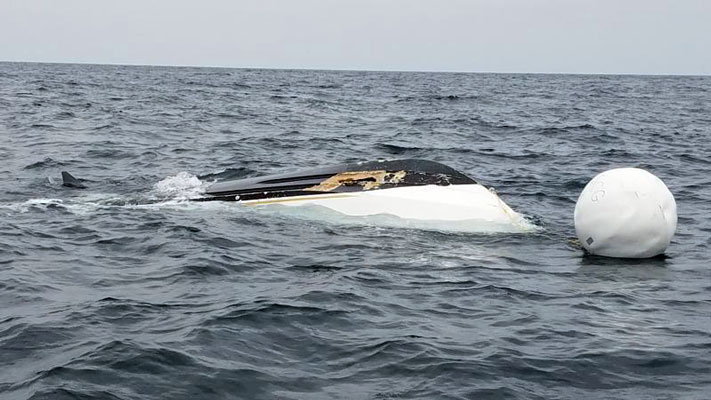 Photo By U.S. Customs and Border Protection: The crew of the USCG cutter rescued all 14 people from a boat that capsized after fleeing and found no injuries. The crew also pulled three packages containing a total of 82 pounds of methamphetamine from the ocean.

SAN DIEGO – Crews from U.S. Customs and Border Protection Air and Marine Operations and the U.S. Coast Guard stopped a boat Sunday off the coast of San Diego that capsized after fleeing from authorities, pulling 14 people and 82 pounds of methamphetamine from the water.

At about 4:30 a.m. on July 26, a crew aboard a multi-role enforcement aircraft was on patrol from U.S. Customs and Border Protection Air and Marine Operations.  The crew spotted a pleasure craft traveling northbound out of Mexican territorial waters with no navigational lights on.  The crew aboard the aircraft coordinated with the crew aboard a U.S. Coast Guard cutter.

The aircraft crew directed the cutter crew to the location of the pleasure boat, which had 14 people on board.  About three nautical miles west of Point Loma, the cutter intercepted the vessel, signaling with lights and sirens for them to stop; however, the pleasure craft instead fled, tossing packages overboard.

Following the boat, the cutter crew observed the pleasure craft take on water and capsize, about nine nautical miles west of Mission Bay, and all 14 people enter the water.

The crew of the USCG cutter rescued all 14 people and found no injuries.  The crew also pulled three packages containing a total of 82 pounds of methamphetamine from the ocean.

All 14 people were turned over to U.S. Border Patrol agents for processing; agents determined they were Mexican nationals with no legal status to enter the U.S. Of the 14 individuals rescued 11 were males ages 18-52 and three females ages 22-32. Homeland Security Investigation’s (HSI) Marine Task Force seized the narcotics.

If you have information about maritime smuggling or suspicious activity along the coast of California, please call the San Diego Joint Harbor Operations Center at 1-800-854-9834 extension 1, or notify local law enforcement by dialing 9-1-1.