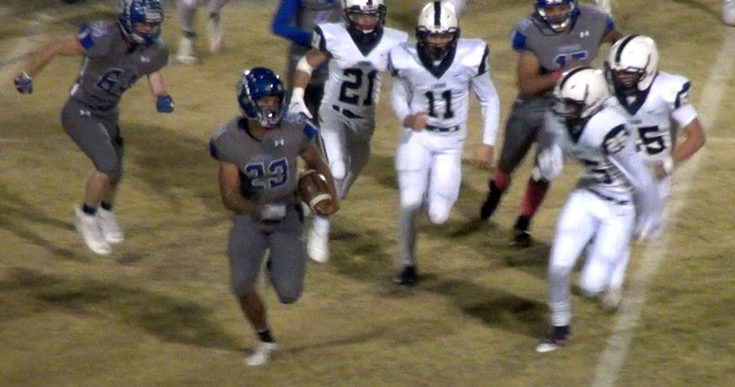 Jon Johnson Photo/Gila Herald: CJ Scrivner (23) makes his way around the right side for a big gain early in Safford’s 50-7 blowout victory over Pusch Ridge Christian Academy last Friday. Scrivner has been ruled ineligible for Safford’s final regular-season game against Sabino after getting kicked out of the contest last Friday night.

SAFFORD – A split-second call on a play where a defensive athlete is running full speed at the quarterback will render the services of Safford’s number one offensive threat, running back CJ Scrivner, out for tonight’s regional championship against Sabino.

Scrivner had already run for more than 100 yards (including a 60-yard TD on the third play from scrimmage) in less than two quarters of play against Pusch Ridge Christian Academy last Friday when he was ejected from the game for launching at and/or head-to-head contact with the opposing team’s quarterback – two things that video of the play appears to refute.

On the play, Pusch Ridge quarterback Hayden Hallett dropped back to pass and just after he let it go Scrivner gave him what appeared to be a forearm shiver – a legal hit and within the timeframe.

The referee didn’t see it that way however and ejected Scivner from the game. Afterward, the official completed the formal ejection report and, per the Arizona Interscholastic Association’s bylaws, Scrivner is forced to miss the following game.

Additionally, even though Safford has video and photographic evidence in hand, per the AIA bylaws there is no appeal process because such an appeal only applies to the last game of the regular season or post-season games, according to Safford Athletic Director Toni Corona.

Even though they will be without Scrivner, Safford head coach Eric Hjalmarson is upbeat about the matchup. He said the reality is they could have five more games or could only have two more games (tonight’s final regular-season game and one playoff game) and that they could make a deep playoff run if they continue to improve in all aspects of the game.

“I mean, we lost our best player offensively tonight – probably our best player – and didn’t miss a beat,” Hjalmarson said last Friday night after the Pusch Ridge game. “So, that’s good for me. It’s good for our team to know that ‘Hey, we can play,’ even if we lose somebody.

I’m just so proud of our kids. We’ve got great kids here. They’ve overcome a lot, a lot. More than the average person knows and needs to know but these kids are resilient. They’re good kids, really good kids.” 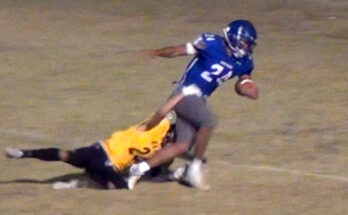 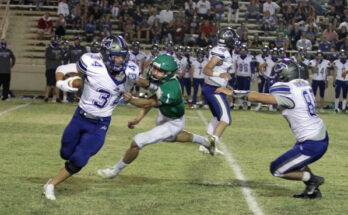