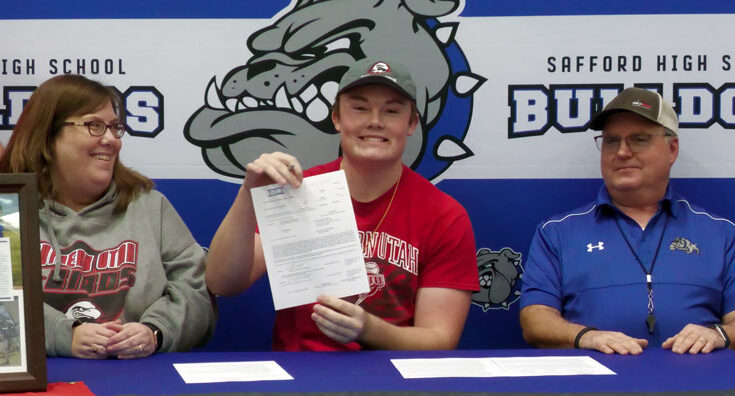 Jon Johnson Photo/Gila Herald: Tanner Emery signs his letter of intent to play football for SUU with his mother, Jill, and head football coach, Bob Park, beside him on Monday.

SAFFORD – After growing up going to Safford schools, Tanner Emery’s family moved to Thatcher for what would be his junior year. And while Thatcher’s football team had more accolades, Tanner said it wasn’t a question that he was going to stay with his brothers on the line at Safford for his final two years. Those brothers were with him on Monday, when he put pen to paper to ceremonially sign his letter of intent to play football for the Southern Utah University Thunderbirds.

The SUU Thunderbirds are a Division 1 NCAA team based in Cedar City, Utah, that plays in the Western Athletic Conference (WAC) and went 5-6 overall in 2022, 2-3 in their conference. Tanner previously signed his actual letter of intent over the Christmas holiday. This event was held with the school as a ceremonial signing with parents, coaches, teammates, and media in tow.

Tanner’s father, Clay Emery, spoke highly of his son and said he was proud of the person he was turning into.

“I’m super proud, of course, what parent wouldn’t be,” Clay Emery said. “I just feel blessed that he’s going to have his education taken care of and just proud of who he is becoming.”

Tanner has been on the offensive line since about seventh grade when an O-line coach spotted him with the running backs and snagged him. He currently runs about 6’3, 275 lbs. and looks to anchor the right tackle spot on SUU’s line – in a couple of years.

“I’m proud of him (for) the way he’s worked,” Safford head coach Bob Park said. “He came in and just to see his progression from his freshman year to now has been really good, and (I’m) just proud of the way he’s worked. He deserves this because he worked for it.”

Tanner’s work ethic was a common theme among those who have been around him. Safford Athletic Director Toni Corona introduced Tanner at the signing and described his work ethic and how she thought he was going to hurt himself from working so hard.

“There were times that I would have to tell Tanner, ‘Tanner, you’re going to hurt yourself’ because he was so determined,” Corona said.

“I have watched him grow and excel not only in football but in track, in the classroom, as a student leader, and most people don’t know he’s got a pretty good set of vocal cords on him as well.”

Prior to joining the Thunderbirds, Tanner will serve a two-year mission for The Church of Jesus Christ of Latter-day Saints. He said his desire to serve a mission prior to starting his collegiate career helped formed his pathways during his recruitment.

“Ever since I’ve been growing up in the church it’s just been really important to me that I serve for my church,” Tanner said. “And so, ever since the recruiting process, I told myself I’m going to go on my mission first before I decide to go play football.”

While Utah schools were a preference, SUU in Cedar City certainly had the inside track. Both Tanner’s mother, Jill, and father, Clay, graduated from SUU, as well as Tanner’s head football coach, Bob Park.

“Ever since I was a kid we’ve been going and taking trips up there,” Tanner said. “We would go see where my parents lived and stuff like that, so Cedar City has just really always been a home to me, and it’s always been a place of refuge and comfort.”

“He (Tanner) grew up in all the local restaurants there, so it already felt like home,” Clay said.

While his parents and coaches bragged about his accomplishments, Tanner gave praise back to all those who helped him become the player and person he is.

“I’m appreciative of my mom, my dad, and my coaches,” Tanner said. “And just all my teammates and being able to build me up into the person that I am now. Just because we came from a small town and we don’t think that we get as much exposure anything is possible . . . if you push yourself and make sure you’re always doing your part you’ll go places.”