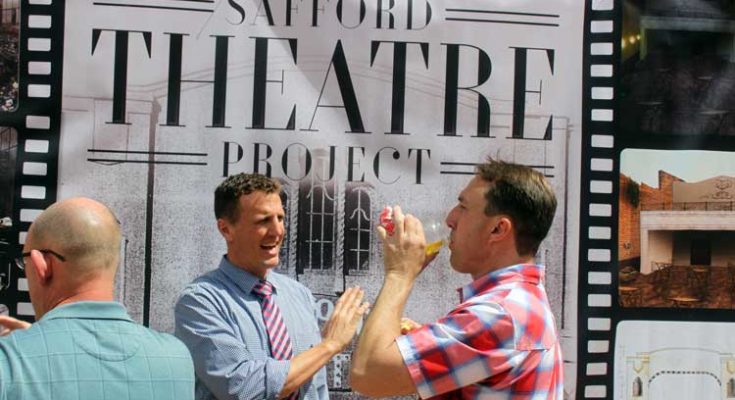 SAFFORD – It was a unique setting for this year’s Best of Safford Awards at the Safford Downtown Association’s 13th annual Appreciation Luncheon on Thursday as it was held in the Safford Theatre, which is currently under renovation into an open-air theatre.

The event was catered by Ginaveve’s Market Place, which also took home the award for Best Customer Service, and allowed the Downtown Association to give an update on the Safford Theatre Project.

According to Graham County Board of Supervisors Chairman and Safford Downtown Association President Danny Smith, the restoration project should have its new facade rebuilt and lobby and interior demolition complete by June. The group then expects to work on rough plumbing and electrical for the new lobby and restrooms. By this time next year, everything should be complete except for the AV equipment and furnishings, according to a construction chart.

New Graham County Town Manager Dustin Welker, who worked for Safford as its Downtown Planner for a decade, said the project is essential to a thriving Downtown.

“There’s no more economic driver that will help your Downtown than a theater,” Welker said. “For tourism purposes, for nightlife, for events that bring people down there that normally wouldn’t be down there, and introducing the public to other businesses down there, (a theatre) is the main economic driver for Downtown.”

Those wishing to help with the renovation project can do so by purchasing an inscribed brick for $50 or $100. Click here to visit the group’s GoFundMe page.

There were some usual suspects on the list of award winners this year and some newcomers, of course. Perennial picks Casa Mañana and Ginaveve’s Marketplace took home Best Dining Experience and Best Customer Service, respectively.

“You know what I like about Casa Mañana,” she asked. “They always welcome you and they always make you feel like they’re glad that you came.”

“Nobody is a stranger,” Hoopes said. “And if you leave a stranger then you’ve left too fast. I was humbly surprised, but it’s an honor.”

Ginaveve’s has just been a Downtown darling for its decor and offerings of its one-of-a-kind gifts on one side of the store and its lunch offerings and gourmet balsamic and oil selections on the other side. Recently, they have begun to serve panini sandwiches in addition to its popular salandwich offerings. A current special is a panini sandwich and two sides for $6.95. Next on the list of expansion is to put a coffee and tea shop in the venue as well.

Owner and operator John Howard said the Best Customer Service Award was the one award they really wanted to win.

“That’s exactly the one we wanted to win if we won any at all,” Howard said. “We strive for good customer service . . . That’s our whole concept for the store; be friendly, bring people in and satisfy their needs.”

While the store is all about diversification, its bread and butter is still its gourmet olive oils and balsamics, which come from a supplier who picks the olives and infuses the products themselves as well.

The business is family owned and operated, with Howard’s daughter and granddaughter working there as well.

“I have my cosmetology degree, but I’d rather be here,” Kristin Howard said. “I just love it. I get to spend time with my family, and I love talking to all the people. It’s just a great environment.”

After two years of work, The Venue on Main owner Steve Hunt’s persistence paid off with the award for Best Business Remodel. The building features a large main area as well as an upstairs area that splits up the building. The Venue on Main is open to rent for special events but get in line as the building gets booked up fast, according to Hunt.