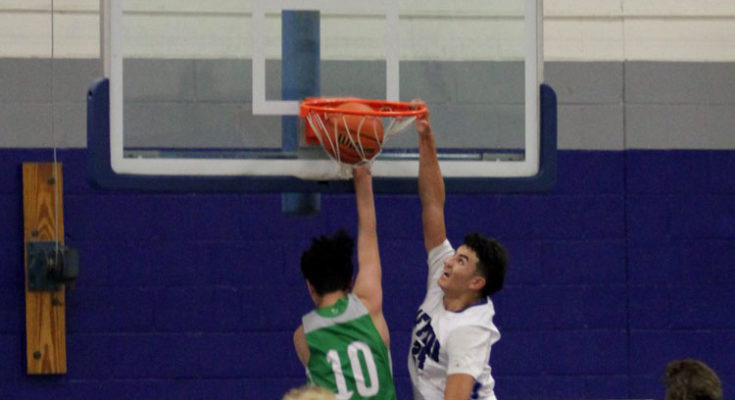 Photo By Stan Bonifacio: Jejdrique Chavez posterizes T.J. Reed on a dunk after a steal in the fourth period of Safford’s 63-61 victory over rival Thatcher on Wednesday night.

SAFFORD – A furious late fourth-quarter comeback by Thatcher came up just short as Sheri Camarena and the Safford Bulldogs (1-1) took the first round in the battle of new first-year coaches and held home court in their opener, 63-61 over the visiting Eagles (0-1).

The game wasn’t always pretty and there was plenty of sloppy play from both sides. Given it was Safford’s second game and Thatcher’s first and that the Eagles really only had four practices with a full squad since the football players went to the state semifinals, the mistakes handling the ball were reasonable to happen at this point in the season. Moving forward, fans should see more tight cohesion from both squads.

Junior Jejdrique Chavez led the way for Safford by scoring a game-high 24 points on eight field goals and two 3-pointers while going 2-5 from the free-throw line.

About halfway through the fourth period, Chavez had the play of the night when he stole the ball from T.J. Reed and took it the other way for a monster jam and collected a foul from Reed, who was posterized.

“Once I got the ball and I had nobody in my way I knew what I was going to do,” Chavez said. “I wasn’t going to let (anything) stop me or get in my way.”

After Chavez’s big dunk, the Bulldogs had the momentum, crowd support, and were up by 12 with just 3:16 left to play. That’s when Thatcher head coach Robby Martindell called a timeout and put his players to the task.

“We didn’t change anything,” Martindell said. “The only thing I said when they came in was ‘it’s either you guys decide you want to try and win or we walk out of here with a loss. At that minute, those last two minutes showed a championship team that we didn’t see the other 30 minutes. So, we’ve got to learn to take those two minutes and stretch it out into a full 32-minutes. And that’s where we’re at. But it’s early season and we’ve got a long way to go.”

Senior Mason Duros traded tossing long-bomb touchdowns to hitting long-bomb 3-pointers and scored three of them on his way to an 11-point night. Returning varsity player junior Trett Wiltbank finished with 8 points, sophomore Christian Smith had 7 and senior Isaac Camarena had 6 to help the cause.

Thatcher had very balanced scoring with junior Michael Greer leading the team with 15 points, followed by senior Collin Thompson with 13, senior Spencer Stevens and freshman Bradley Curtis each had 9 apiece, and freshman Brandon Napier had 8.

It was a game of runs early on as Safford sprinted to a 5-point lead with an opening bucket by Wiltbank and an and-one play by Smith.

Thatcher came back by breaking Safford’s press defense with a nice pass from Thompson to Curtis for his own and-one play and went on a 9-0 run to take the lead by 4.

The teams traded hits back-and-forth with Thatcher taking the early lead, 15-13, after one period of play behind 3-pointers by T. J. Reed (although uncredited in the scorer’s book) and Tanner Palmer.

Chavez started to heat up in the second period and showed off his passing skills as he hit Wiltbank in stride on a three/quarter court pass for a layup.

“I told my team to play good defense and eventually we would get fast-breaks out of it,” Chavez said.

Curtis showed he could pass like that too and took a long rebound and hit Thompson on the outlet for an uncontested fast-break layup.

Safford’s man in the middle Jordan Turner gave Thatcher fits when then drove the lane and had at least four blocks while two other blocks were called as fouls.

With time running out in the half, Safford made a horrible play by fouling Curtis under the Bulldogs’ basket with only 1 second on the clock. Curtis hit both free throws at the other end of the court, and that should have been it. But Noah Bevens found Dax Gonzales on a great pass that had shades of Grant Hill to Christian Laettner circa 1992. (Youngsters, Google “The Shot” to see what I mean.)

Gonzales gathered in the pass and launched a sky-high 3-point shot at the buzzer that hit nothing but net. Pandemonium ensued as Gonzales’ only bucket of the night put Safford up by 5 at the half, 32-27.

The third period was close for most of the time until the Bulldogs had a run at the end with Duros hitting two 3-pointers and Chavez scoring in the paint and on fast-break points after a steal. Greer came back with a 3-pointer of his own, but Safford still increased its lead to 6, 53-47.

Safford began to pull away in the fourth period as Smith hit a 3-pointer and Wiltbank finished a nice drive to the bucket past James Shumway. Then the crowd erupted over Chavez’s dunk and Safford had a 12-point lead.

Thatcher scrapped back by creating turnovers and hitting shots from the free-throw line, but they also missed close shots in a couple of opportunities.

Safford had a couple of chances to close out the game but also missed easy shots which kept the door open. Napier then drilled a 3-pointer just before time expired and, after a brief pow-wow, the officials put 1.1 seconds back on the clock.

Unlike the halftime buzzer-beater, the team that needed the points didn’t have the ball. Regardless, Chavez chucked the ball downcourt on the inbound and Thompson tipped and stole it. He then tossed up a prayer from beyond mid-court that never had a chance and Safford escaped with the 63-61 victory.

“The boys did awesome,” Sheri Camarena said. “I’m proud of them for coming together and getting that win over a big rival.”

“It’s one of 30 games that we play in a season,” Martindale said. And last year they lost the first three and still finished number three in the conference. And so we’re going to hang our heads a little bit. We’re going to let it hurt. But this isn’t going to affect what our end goal is.”

Safford will travel to take on the Florence Gophers (0-1 conference, 3-2 overall) on Friday, starting at 7 p.m.

Thatcher beat Chino Valley (2-1) 74-55 in the opening game of the Sedona Invitational Basketball Tourney on Thursday and will play the Page Sand Devils (2-0) and the Cicero Prep Centurions on Friday.

In other local prep action this week:

The Roughriders will next take on the 6A Mesa Dobson Mustangs (1-1) on Friday, Dec. 6 at Kofa High School in Yuma.

The Wildcats will next travel to face the Hayden Lobos (0-1 region, 0-4 overall) on Friday, Dec. 6 before hosting the same team Tuesday, Dec. 10.