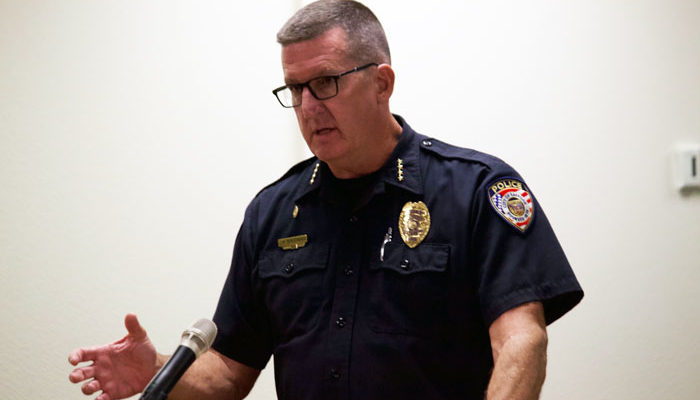 SAFFORD – Citing a need for cohesion between municipalities, the Safford City Council declined to vote on a ban on the use of cell phones while driving within city limits.

“I don’t want this to die,” Safford Mayor Jason Kouts said pun unintended. “I’m 100 percent in favor of this, (but) I don’t want us to vote on this tonight because from the sounds of it I don’t know if I’m going to get it to pass.”

Safford Police Chief Joe Brugman presented the ordinance to the council and said that since the rise in the use of smartphones traffic collisions that previously leveled off or lessened have now increased in the last decade. He said car versus pedestrian and car versus bicyclist collisions have increased the most and often result in a fatality.

The proposed ordinance would make it against Safford City Code to use handheld mobile telephones or portable electronic devices while driving. The ordinance would still allow for hands-free use through integration with one’s vehicle. First responders such as police, fire, and EMS are exempt from the law while performing their duties, and anyone communicating with them or a hospital would be exempt as well.

Brugman said Arizona is only one of two states that don’t have a statewide ban on the use of cell phones while driving and told the council about some data from the National Highway Traffic Safety Administration, which reported 3,450 deaths nationally in 2016 were due to distracted driving.

He added that the average time a person spends looking at their cell phone screen to either text, email, make a call, or some other use is five seconds at a time. Traveling at just 35 mph, that means a driver is blind from the road for 250 feet – just 50 feet shy of the length of a football field.

While the council said they were in favor of the ordinance, Mayor Jason Kouts and council members Michael Andazola Sr., Arnold Lopez, and Gene Seale said they were wary about passing an ordinance that wasn’t the same in Thatcher and Pima since the various municipal courts are now together as the Gila Valley Consolidated Court.

“I personally am in favor of doing something,” Seale said. “I could be more in favor of having (a) dialogue with the other communities and putting together an ordinance that would be exactly the same in every community.”

Brugman had informed the council that he has had discussions with Pima, Thatcher, and Graham County regarding having a similar ordinance in each area.

“Pima, Thatcher, and us pretty much need to be on the same page,” Lopez said. “We share the same magistrate court, so we don’t want to send the judge mixed signals.” (sic)

On Tuesday, Pima Town Manager Sean Lewis confirmed to the Gila Herald that Pima would be matching Safford’s proposed ordinance and that it will be on its council’s next agenda Oct. 2 for discussion and action.

Thatcher Town Manager Heath Brown said the Thatcher Town Council briefly discussed the matter at a work session Monday night but that any such ordinance would not be on the agenda for its next regularly scheduled meeting Sept. 17. Brown said it appeared some council members had concerns about Safford’s proposal because it addressed more than just texting and included all types of use of a cell phone while driving.

“There’s just a lot of questions,” Brown said. “There’s a lot of good things about it and a lot of concerns about it.”

He said one thought was to wait and see how the ordinance goes for Safford first but advised that the council has just started to examine the possibility of such an ordinance and as of now everything is up in the air.

That means Safford could still be the first municipality in Graham County to pass the ordinance if it is on its Sept. 24 meeting agenda, otherwise, Pima will have the first crack at it Oct. 2.

While any ordinance from the three municipalities would be the first such law in Graham County, the town of Clifton already passed a law banning cell phone use while driving back in April 2017. That law carries the exact same fine schedule as the proposed Safford ordinance.

As for the county, Kouts had his doubts about the Graham County Board of Supervisors agreeing on the same proposed ordinance.

“I don’t think you can get three supervisors to agree on much,” Kouts said.

Supervisor Paul David was in the audience and corrected Kouts by saying only two supervisors had to agree to have a majority to pass legislation.

After the meeting, David told the Gila Herald that the county was looking at such an ordinance as well but was doing its due diligence and has a meeting with the Small County Supervisors Association on Wednesday and Thursday and will inquire about its position on the issue.

He said one of the questions the BOS wants to be answered is if the Arizona Department of Public Safety troopers would enforce the law since it isn’t statewide and they are a state agency. The larger counties of Maricopa and Pima do have laws against cell phone use.

“This is one of those major safety issues that – just like seatbelts and baby seats – it will happen,” David said. “There is some resistance and some supervisors would like to wait until the state does it but people are in jeopardy in the interim. How long do you wait? Do you wait until it’s your own family member or is it OK for somebody else’s family member to get rear-ended . . .”