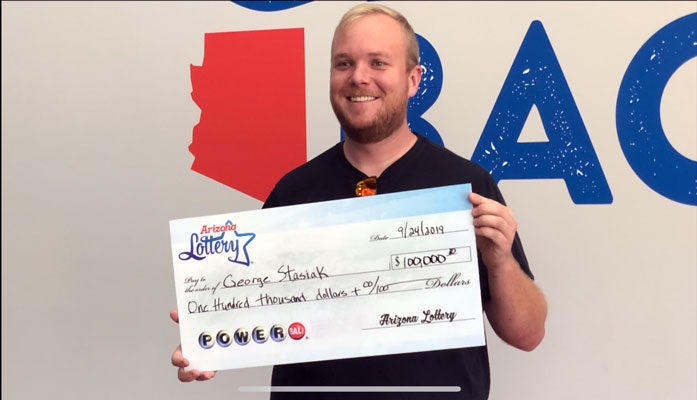 “I honestly probably would have never checked that ticket for a long time or ever if it weren’t for your Facebook post.”

SAFFORD – George Stasiak was scheduled to work his normal shift at NAPA Auto Parts today, but instead he drove to Phoenix and claimed his $100,000 Powerball winning lottery ticket.

“He came in and took the day off,” an employee informed the Gila Herald. “He was so excited.”

The winning ticket was sold at the Circle K at 1123 W. Thatcher Blvd. in Safford and was for the Saturday, Sept. 21 drawing.

Stasiak told the Gila Herald that he never plays the lottery and that he just purchased the ticket on a lark.

“It doesn’t seem like this type of thing happens to people who you know,” he said. “I walked into Circle K to buy some Gatorade and some water on Saturday and I said, ‘Hey, can I get a lottery ticket?’ because me and my buddy were just talking about how cool it would be to win the lottery.”

Stasiak said the clerk asked him if he wanted the Power Play and after explaining what it did he agreed to the extra dollar charge, which doubled his winnings.

After taxes and fees, the total payout for the lucky ticket came to $71,200. Stasiak said he took the check right to his bank and deposited it. He plans on using the money to purchase an IRA or maybe some investment CDs (time deposit accounts issued by banks in a range of maturities) and that his one splurge may be to remodel his bathroom.

On Monday, the Gila Herald posted that the winning ticket had not yet been claimed and that post was shared 645 times as of Tuesday morning.

“The whole reason how I found out is I saw your post on Facebook,” Stasiak told the Gila Herald. “And I knew before I even checked the ticket that I won . . . I walked out to my truck; It was in my center console and that was that. I just gave it a quick glance and knew I had done it, got back in my truck, went to Circle K and they confirmed it was a big winner and to go to the lottery office. I honestly probably would have never checked that ticket for a long time or ever if it weren’t for your Facebook post.”

The good news couldn’t have come at a better time for Stasiak, who is a full-time student at Eastern Arizona College just trying to get by.

Two years ago he suffered an injury on a motocross track when a guy in another lane crashed. The other man’s motorcycle went into Stasiak’s lane and he collided with it throwing him over the handlebars and resulting in a broken collarbone.

After receiving 13 screws and a plate in his collar bone, Stasiak also had to endure three wrist surgeries over the last two years, which caused him to no longer be able to work as a mechanic.

Now, he hopes to finish his education and continue to move forward with life.

“I think everything happens for a reason,” he said.