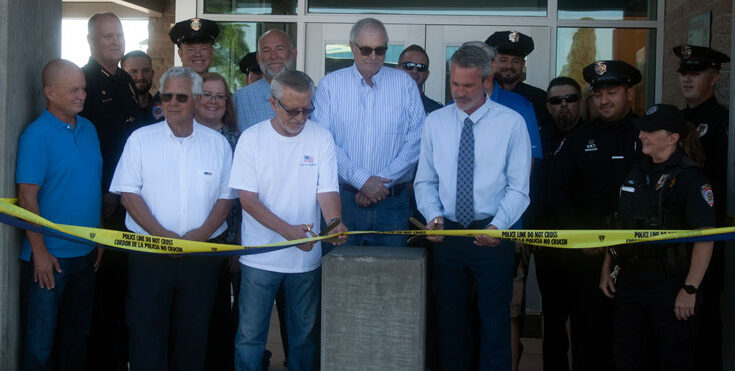 SAFFORD – After more than 34 years of work on achieving a new police department, law enforcement, dignitaries, friends, family, and the general public celebrated the opening of the new Safford Police Department on Wednesday with a ribbon-cutting and open house.

The event began with a flag-raising with bugle accompaniment, and a moment of silence led by Safford Police Chief Glen Orr, who said it was for the Reed family – who lost 4-year-old Maci Reed to flash flooding in Pima recently – and “all victims” the officers work for each day.

Orr recalled walking into the former Sheriff’s Office at the start of his career in the same location more than 30 years ago.

“Today, I stand here a much different officer walking into a new building I would have never imagined 30 years ago,” Orr said. “And I find extreme joy in knowing that the citizens and community have given us this opportunity.”

The $2.7 million, 6,000-square-foot facility sits where the old jail used to be and houses new administrative offices, as well as new interrogation rooms, locker room, conference rooms, and more. With an update to the existing 4,400-square-foot police department building adjacent to the new headquarters, the two facilities together are expected to easily service Safford’s needs for the next 25 years.

By utilizing the adjacent property and updating the current structure, the city reportedly saved between $2.5 and $3.5 million on construction costs and now has a combined facility of more than 10,000-square-feet. Funding for the new department and upgrade came directly out of the city’s currently existing revenue (mostly from property taxes) and did not need any new source or tax.

Safford got the land from the county in a deal that was approved in May 2019 by both the Graham County Board of Supervisors and the Safford City Council, in which the county exchanged the old jail site for setting a 25-year fixed water rate for use at the Graham County Fairgrounds to water the ball fields at $2.20 per thousand gallons while the normal industrial rate for businesses in Safford is $2.65 per thousand gallons. The county previously had a cheap water rate at the fairgrounds that expired about four years ago, and the idea of getting a new water-rate deal along with not having much use for the old facility spurned the discussion. The county currently uses about 50 million gallons of water at the fairgrounds each year.

The agreement also includes a commitment from the city to explore getting its effluent line from the wastewater treatment facility to the fairgrounds. If the city can afford to put in the effluent line, the county will guarantee to purchase $110,000 per year of reclaimed water or $2.50 per thousand gallons per year – whatever is greater.

In addition to having a secure lobby, the new building gives the police space to handle interviews away from prying ears of the public, increases evidence storage abilities, and upgrades the look of the area across the street from Firth Park.

Safford Mayor Jason Kouts dedicated the building to the current and all of the past Safford Police chiefs.
“You guys and Chief Orr have worked out of a building that has been very insufficient but yet, you guys did it,” Kouts said. “You guys pulled it through, and look at this great accomplishment.”

The Safford City Council had been examining ways to build a new police department since 2000, with a variety of options placed before it throughout the years. The original building was built in the 1960s and initially served as an office for the Boy Scouts of America.

“When I walked in the front door of the police department in 1981 when I signed on with the Safford P.D. we needed a new building then,” Griffin previously said at the groundbreaking. “So, this is a very exciting day. We’ve added on, patched, and pulled things together for nearly 40 years. To finally have a new building going up for the community and for the people here is great.”

Both Kouts and Orr thanked all those involved in the project, including engineers, construction workers, city staff, and more. Orr also personally thanked the entire local law enforcement community for the sense of family it has.