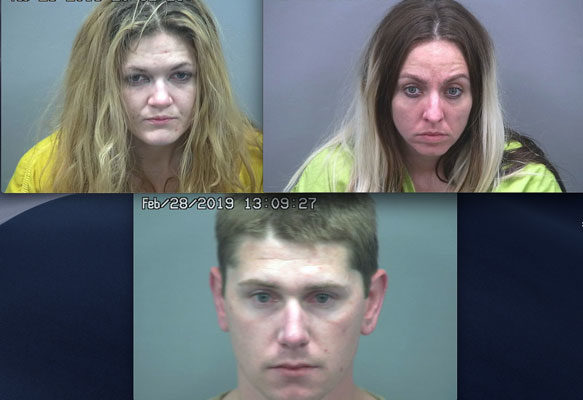 SAFFORD – Months of investigation culminated with the arrest of an alleged heroin dealer and two cohorts after a drug task force raid on his home Feb. 28.

According to police reports, officers received a “no-knock” search warrant for Winans’ residence in the 1100 block of W. 29th Place after months of investigation, which led them to believe Winans has been dealing heroin. In addition to information culled from various resources, an undercover officer also previously purchased .9 of a gram of heroin from Winans, according to police reports.

On Feb. 28, the drug task force made up of officers from the Safford, Thatcher, and Pima Police departments, Graham County Sheriff’s Office, and Arizona Department of Public Safety, raided the residence at about 6:45 a.m. by announcing their presence via a loudspeaker and breaching the front door using door rams and pry bars. Once inside, officers located Cook and Cole, but Winans was not at the residence. Cole advised that she lives elsewhere but had gone to the residence to do her laundry. Cook advised she lived at the residence and is Winans’ girlfriend. Both women denied any knowledge of drug activity.

At about 7 a.m., Winans was spotted driving toward the residence in a 2016 Kia. Winans then made an abrupt U-turn but was later pulled over by a Safford officer in the 3000 block of Apricot Loop. A glass jar containing marijuana was found inside the car and the officer confiscated $828 in cash from Winans’ wallet.

During the search of the house and other vehicles at the residence, officers seized a bag of heroin (no weight given in preliminary report), numerous syringes with one loaded with a heroin mixture, a bag of psilocybin (magic) mushrooms, another glass jar containing marijuana, 112 blue pills of Alprazolam (a prescription drug commonly known as Xanax used to treat anxiety and panic disorders) found in tin foil, and a plethora of drug paraphernalia.

Detectives also noted that Winans had pawned 13 firearms since September 2017 at a local pawn shop and never attempted to recover the guns.

Additionally, surveillance of Winans showed him conversing with two known criminals with drug and weapons charges who are now either incarcerated awaiting trial or have been sent to prison.

Winans, Cook, and Cole, were all transported to the Safford Police Department and interviewed and then were booked into the jail on the above-listed charges. Two dogs located at the residence were turned over to Safford Animal Control, which transported them to the Graham County Animal Shelter.

The case is still being finalized by detectives and official charging from the Graham County Attorney’s Office has yet to be filed, according to online court records.