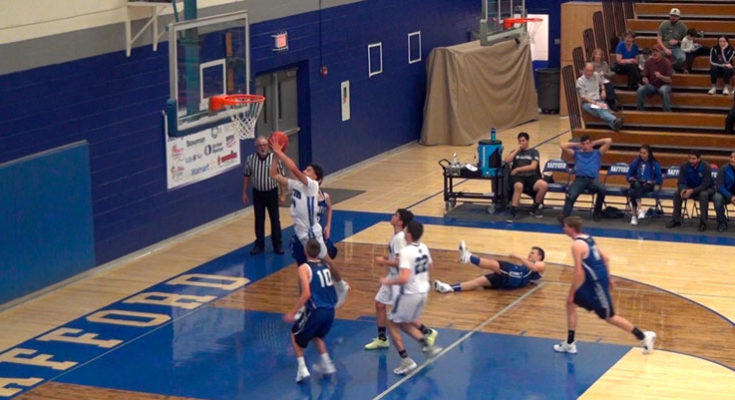 SAFFORD – The Safford Bulldogs (3-1 overall) used a stifling full-court press defense to force turnovers and quick buckets on their way to a close victory over the Snowflake Lobos (1-1 overall) Tuesday night.

The Bulldogs came back from down 16 points in the third period to beat the Lobos, 77-73.

It was a game of runs with Safford’s Andrew Smith outscoring the entire Lobos team 9-2 in the opening of the first period as Smith hit two layups off turnovers, drove the length of the court for his first layup bucket after a Safford defensive rebound, and tickled the twine from 3-point-land.

But the Bulldogs had its own share of mistakes and committed 19 turnovers in the game. Several of those led to fast-break points for the Lobos, who came back in the first to take a 12-11 lead after Jake Christensen hit the first of his five 3-point buckets on the night. Christensen finished with 17 points.

The Lobos also ran on close-shot misses by the Bulldogs and led 22-14 after the first period of play.

“They had a good defense which we had trouble breaking at first,” Jejdrique Chavez said. “We came out sluggish and didn’t do so good in the beginning.”(sic)

Safford began to come back in the second period as both Drew Cochran and Chavez scored 3-point buckets the hard way by getting the field goal to drop while being fouled and hitting the ensuing free-throws. Those plays and a few others saw Safford take back the lead by 4 points.

“Safford started taking it to the rim and converting,” Wood said. “You know, they got to go to the free-throw line a lot and we didn’t. So, it is what it is and we need to get better.”

Snowflake’s Jared Fusselman got hot in the second and peeled off a personal 10-0 run as he hit three 3-pointers and a foul shot to put the Lobos up 34-29 with about three minutes left in the half.

Fusselman then hit his fourth 3-pointer of the period after Keegan McKinney was called for a charge on a Euro Step move. Fusselman finished with six 3-pointers on the night and a team-high 23 points.

Safford again came back within striking distance as Dom Gutierrez made a tough scoop layup and Smith drilled a 3-pointer just before the buzzer and the Bulldogs headed into the locker room down 39-36.

The teams played nearly to a stalemate in the third period as Safford came back late after Snowflake had taken a 16-point lead and Fusselman made a ridiculous circus over-the-shoulder shot over Cochran that kissed the top of the backboard before falling through the net. However, the Bulldogs started finding cutters to the basket and putting back offensive rebounds to cut the Lobos’ lead down to just 4 points, 58-54, by the end of the period. Safford would finish with 13 assists for the game.

In the fourth, Chavez tied the game at 61 apiece on an and-one play and then gathered up a loose ball and hit Mason Duros downcourt, who put in the bucket to put the Bulldogs up 2 points with five minutes and change left in the game.

“We fought back and got ahead and kept the lead,” Chavez said.

Passing helped conserve the win for Safford as Cochran found McKinney, who put it in softly off the glass.

Chavez, who finished with a game-high 28 points, was also big at the end of the game and scored a couple tough shots down low and hit 3-4 from the free-throw line in the end to secure the victory. Nearly half of Chavez’s points came in the final period of play.

Safford will next play a doubleheader to start the Round Valley Roundball Shootout in Eager on Dec. 13. Safford will take on host Round Valley at 1:30 p.m. and then play the Holbrook Roadrunners at 6 p.m. The Bulldogs will then take on the Mogollon Mustangs on Dec. 14 at 10:30 a.m.

The Thatcher Eagles (2-2 overall) dispatched the Bisbee Pumas 84-50. The Eagles play Thursday night at Florence against the Florence Gophers, starting at 7 p.m.

The Pima Roughriders (4-1 overall) demolished the Benson Bobcats 69-38. The Roughriders are up in Flagstaff for the Holiday Basketball Tournament and started with a game against the Tolleson Union Wolverines.