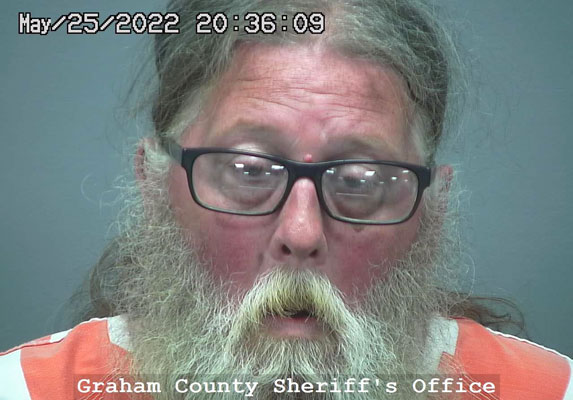 SAFFORD – Karl Newton, 51, of Safford has been charged with 18 separate counts of sexual exploitation of a minor through possession and/or sale of visuals that include minors performing sexual acts.

If convicted of each charge, he faces a possible sentence of more than 300 years in prison.

Newton was taken into custody by Homeland Security Investigations (HSI) on May 25 after a lengthy investigation. Upon the issue of the warrant for Newton’s arrest, his bond was set at $250,000.

The initial investigation began on Dec. 9, 2020, when investigators received a National Center for Missing and Exploited Children (NCMEC) Cybertipline Report regarding eight files suspected to be child pornography uploaded to the Kik Messenger application. Two separate uploads took place on Nov. 6, 2020, and Nov. 10, 2020. The files included videos of adults sexually assaulting pre-pubescent children as well as children having sex with each other.

HSI tracked down the associated email address for the account that uploaded the material and identified the user as Newton.

Special Agents then were approved for a search warrant on March 30, 2021, that compelled the owners of Kik Messenger, Medialab AI Inc., to produce all records pertaining to Newton’s account. According to the Department of Homeland Security’s investigation, out of 3,674 media files examined in the data dump of Newton’s account by Kik on April 5, 2021, 165 depicted child sex abuse material (CSAM). The report listed there were 51 duplicate files and 114 unique files. The files include a number of videos depicting sexual assault on juveniles.

The findings prompted HSI Special Agents to serve a federal search warrant on the residence on W. 18th Street where Newton was residing in Safford on Aug. 5, 2021. Eight HSI Special Agents and two Safford Police detectives participated in the raid, which resulted in the seizure of several electronic pieces of equipment and the interrogation of Newton. Additional images and videos of child pornography were located on a laptop and cell phone reportedly owned by Newton, with some victims possibly as young as 6 months old.

During questioning, Newton allegedly admitted to downloading the CSAM but said he did so because he was bored and it gave him “something to do.” He reportedly said he played along with others who sent him items and wanted him to role play.

However, the investigation showed Newton also disseminated CSAM to others, sending videos to multiple other people.

Newton was taken into custody on May 25 and had his initial appearance the following day. He is currently incarcerated in the Graham County Adult Detention Facility awaiting adjudication on his charges.