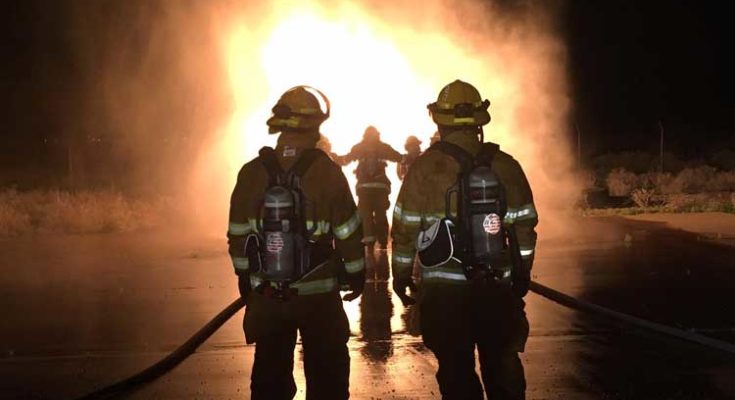 The department was first dispatched to a debris fire at the Gila River near the Eighth Avenue Bridge at about 5:30 p.m., but soon after they were paged out at about 5:45 p.m. to a residential fire on Cactus Road south of Safford.

Safford Fire Chief Clark Bingham said he kept two fire engines and their crews at the debris fire while the tanker was reassigned to the residential fire. Since half his crew was battling a fire at the river, Bingham called for assistance from Thatcher, who showed up to help at the residential fire.

“They are always a good helping hand,” Bingham said.

According to Bingham, the residential call was a manufactured home that caught fire after the resident was burning weeds without a permit. The weeds caught grass near the home on fire, which then ignited the trailer. Bingham stressed that there should be at least 30 feet clear of any brush from a residence prior to burning and those intending to do so must get a burn permit from the Arizona Department of Environmental Quality. There were no injuries to the occupants of the home reported.

The firefighters kept the blaze to the single structure, but due to the nature of how manufactured homes burn it was deemed a total loss.

After fighting two separate fires at the same time, the crews were ready to call it a night when they were dispatched at about 10:15 p.m. to a vehicle fire on U.S. Highway 191 North at the start of “The Straight”, roughly one mile north of the intersection with U.S. Highway 70. Callers to Graham County Dispatch reported the fire started spreading to the grass and had blocked lanes of traffic on the highway.

Bingham described the vehicle as being a late 1970s, or early 1980s Chevrolet pickup truck. He said the fire is deemed suspicious at this time because the driver of the truck was not at the scene and there were no indications why it would start on fire.

After extinguishing the vehicle fire, the crews made their way back to the station to refill air packs and complete their required duties so they are ready for the next call. They then called it a night between 11:30 p.m. and midnight.

“The guys sacrificed a lot,” Bingham said. “They put in a lot of work to provide fire protection for the community, and they do a good job of it.”