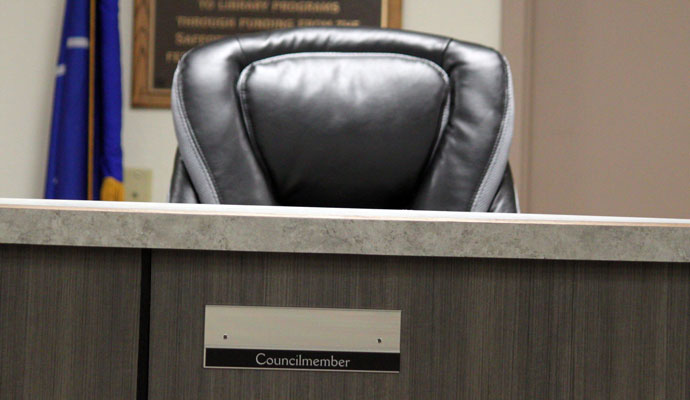 SAFFORD – The Safford City Council seat vacated by former council member Chris Taylor will remain vacant for the time being.

That was the consensus of the Safford City Council after discussing the matter at its Monday night meeting.

Taylor resigned his position from the council to seek treatment for substance abuse disorder. He informed Safford City Manager Horatio Skeete of his decision over the weekend and penned an editorial printed in the Gila Herald on Monday.

At the council meeting, Skeete gave two recommendations on how to proceed regarding the open seat. He advised that if the council chose to appoint a replacement, they should advertise the position, interview applicants and exclude anyone who is currently running for the Safford City Council. The second option would be to leave the seat vacant until the primary election in August.

After the election, a candidate who won the seat could then be appointed to fill the position for the rest of the year until he or she would be officially seated in the position for being elected. Skeete said the only danger there would be if no clear-cut winner was elected in the primary election, thusly leaving the seat empty until after the general election in November.

While in previous years the seats have been elected in the primary with the exception of the mayor’s position, there are reportedly a number of possible candidates in this year’s election, which could cause the seat to not be elected until the general election in November.

Mayor Jason Kouts advised he would prefer the citizens of Safford to elect Taylor’s replacement instead of the council appointing the spot. Council members Gene Seale, Arnold Lopez, and Steve McGaughey, and Vice-Mayor Richard Ortega also voiced their support.

“We have to do what’s best for the city,” Ortega said. “That’s number one, and I feel that having the public input on who is seated is very important.”

The council then gave its consensus to leave the seat open at least for now as it waits to see how many candidates qualify for the primary election.

Candidate packets with signatures are due to be turned in by April 6. The council may then revisit the situation if it deems it necessary to appoint a replacement, or it could continue to keep the seat open and wait for the primary election in August to fill the spot. In the meantime, mayor Kouts advised that he would be the de facto tie-breaker since the council is now a current even six members and would abstain from voting in case of a tie. If another council member has to abstain from a vote until the open seat is filled and a vote comes to a 2-2 tie, Kouts will also be the deciding vote in that case as well.

“If we become lopsided, the mayor could not vote and he could be the one (who) everybody loves or everybody hates,” Kouts said. “And I’m not scared to make those tough decisions.”