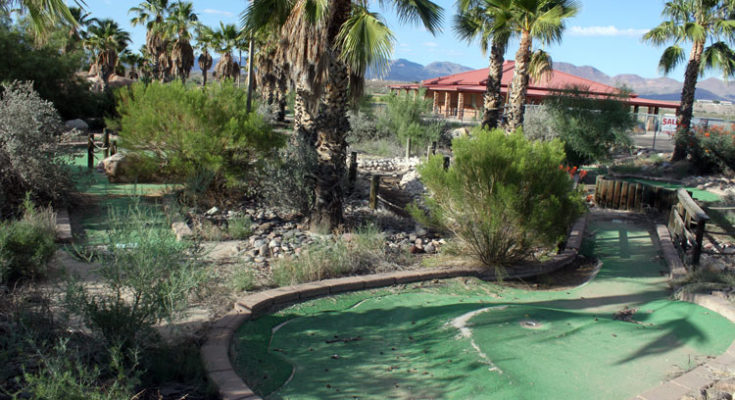 Jon Johnson Photo/Gila Herald: A plan to purchase the Swings ‘N Things property and turn it into public use for a park and ballfields didn’t garner enough votes from the Safford City Council.

Motion to purchase the facility fails by a 4-3 vote

SAFFORD – A plan to purchase and rejuvenate the Swings ’N Things property at 380 N. Entertainment Ave. into a public facility with parks and fields fell short of the necessary votes by the Safford City Council.

At its Sept. 10 meeting, the council voted against a proposal to purchase the 14-acre facility 4-3, with Safford Mayor Jason Kouts and council members Arnold Lopez, Michael Andazola Sr., and Gene Seale against it.

Safford City Manager Horatio Skeete had asked for approval to purchase the property for $385,000. In addition to an existing building, the property formerly ran a putt-putt golf course, batting cages, driving range, parking lot, and an existing well to water the grass. The facility closed in 2006 and has been up for sale ever since.

Skeete said the Boys and Girls Club of the Gila Valley was interested in operating the facility and use the space to help expand the club.

Vice Mayor Richard Ortega moved to approve the purchase and the motion was seconded by Steve McGaughey.

Kouts expressed his position against spending money on the project and suggested if the city had funds to spend in such a fashion that it should instead use them to build the extension of 14th Avenue north of U.S. Highway 70 and connect it with the Fed Ex facility to create a business corridor that would, in turn, generate sales tax. He said he felt with the purchase price and cost to renovate the project would be too expensive.

“There’s going to be quite a bit of expense to regenerate this place . . . We have quite a bit of property the city owns. Why would that not be considered looking into making parks and recreational facilities? So, I know I can tell you that I’m not in favor of buying Swings ’N Things. I’d like for that price to have gone completely way down.”

Council Member Chris Taylor said while he felt the $385,000 purchase price was higher than he expected, it is still significantly less to purchase Swings ’N Things and develop it than it would be to develop other lands the city already owns. Skeete then corroborated that statement. Taylor said residents appeared to be in favor of creating such additional amenities.

“They want green parks and baseball and soccer fields closer to town that they can enjoy and play on,” Taylor said.

After the vote, Taylor told the Gila Herald that he was perplexed by the council’s decision.

“Kids are starving for something to do,” he said.

Taylor added that the move would also have enabled the Boys and Girls Club to move out of its existing facility and expand.

Boys and Girls Club of the Gila Valley Executive Officer/Director Mick Ruiz told the Gila Herald that despite the setback the club will still find a new home somehow.

“I’ve been looking at our options since I took over,” Ruiz said. “We want to get to that point. If we can get the support of the city and we can get the support of the community, then great, we’ll get there. But I know eventually, we’ll find a new home. We’re growing; our numbers have increased again this year again . . . And plus we want to open up our teen program as well. We just don’t have space for a full-functioning teen program and I know that’s vital, especially for the community.