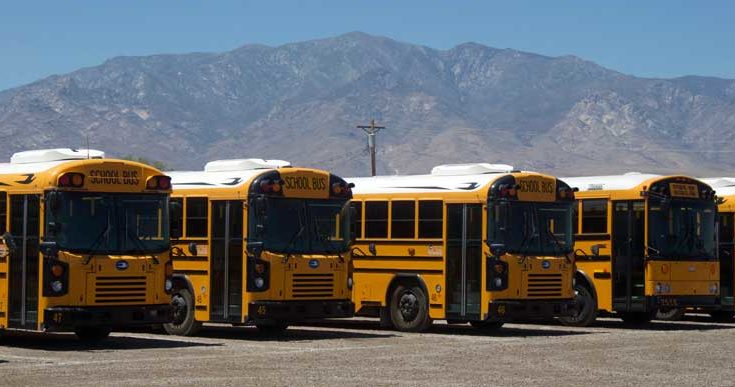 Jon Johnson Photo/Gila Herald: Vandals have caused roughly $50,000 in damage to the Safford Unified School District’s bus barn and storage facilities in the past few months.

Recent cases have caused roughly $50,000 in damages/suspects caught after fleeing from the scene the following night

SAFFORD – The Safford Unified School District’s bus barn was vandalized for at least the third time in recent months. The damage to equipment and vehicles at the bus barn and storage facility could exceed $50,000.

According to SUSD Transportation/Maintenance Supervisor Phillip Nelson, the facility’s surveillance system showed someone had damaged the area at about 3:15 a.m. that morning. Tools from a tool shed had been removed and scattered throughout the area, and work trucks and a bus were vandalized with red paint and fire extinguishers. The rear windows of a bus and work truck were also broken in the melee.

Nelson told the Gila Herald that the incident was just one of multiple incidents that have been ongoing since April. In the past, perpetrators have broken into another storage building that housed electrical equipment formerly used at the David M. Player Center for the Arts and stole or damaged a lightboard, soundboard, mixers, and speakers.

“They went in there and spray painted and let off about 15 fire extinguishers and ruined 90 percent of the electronics that were in there,” Nelson said.

Thankfully, most of the equipment was items the CFA had just replaced, however, the stored items were going to be used at the school’s football field and other areas.

During another incident, the perpetrators hot-wired trucks and performed their own daredevil show doing doughnuts and driving erratically, eventually blowing one of the truck’s engines. Still another time saw damage to the area’s greenhouse.

“They hot-wired the trucks and drove them through the fence and then did a demolition derby running the trucks into each other,” Nelson said. “They blew out an engine on one truck and blew out all the tires on another doing drag racing.”

Additionally, the erratic driving caused the site’s gravel to chip the paint and windows to the facility and multiple vehicles.

Nelson said the modus operandi (M.O.) in each of the incidents suggests it is the same two people causing the damage each time. The district has upgraded its fencing and plans to add more surveillance cameras in an effort to curb the problem and prosecute those who are committing the crimes.

Police may have taken a step in that direction Wednesday night when two youths were caught breaking into the bus barn.

Officers were dispatched at about 9:32 p.m. and saw two juvenile males fleeing from the area. After receiving information from an anonymous tipster, officers arrived at the home of one of the youths and located both juveniles.

During interrogation, the juveniles allegedly admitted being at the bus barn that night but denied any of the other incidents and said they were staying at a residence south of town the previous night.

The case was forwarded to investigations, which is comparing evidence found at the scene from the previous incident to see if it matches up with the two juveniles who were caught fleeing Wednesday night.