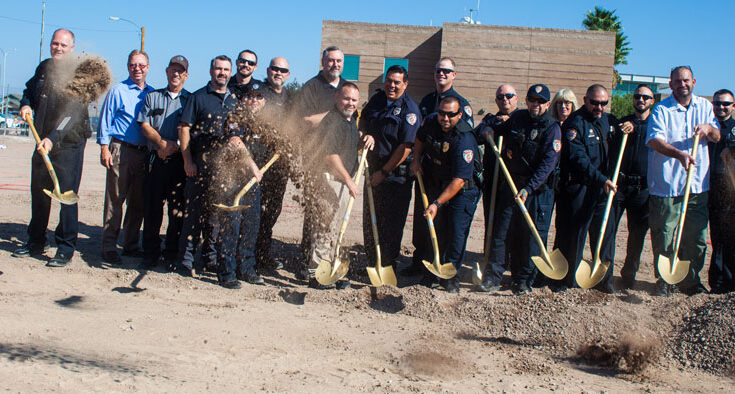 SAFFORD – The city of Safford officially broke ground Thursday morning for the construction of a new Safford Police Department.

Safford Police Chief Glen Orr opened the ceremony and thanked the community and all those who were involved with the project and department. He said his department appreciates the opportunity to work with all the other entities and government.

“We have the support in this valley for law enforcement that is better than probably a lot of places if not everywhere,” Orr said. “I would consider this one of the best places to be in law enforcement.”

The city will build a new, 6,000-square-foot facility where the old Graham County Jail used to be for its new police department. The $2.7 million project will also update the existing 4,400-square-foot building, which will continue to be utilized by the department. The new two facilities together are expected to easily service Safford’s needs for the next 25 years.

By utilizing the adjacent property and updating the current structure, the city will save between $2.5 and $3.5 million on construction costs and will have a combined facility more than 10,000-square-feet. And funding for the new department and upgrade will come directly out of the city’s currently existing revenue (mostly from property taxes) and will not need any new source or tax.

Tucson-based BWS Architects was awarded a $322,386 contract to design and administer construction. The company has been involved in various police facilities in southern Arizona. There were not any individual bid packages, and BWS handled the bids for contractors. Danson Construction LLC, of Phoenix, was chosen to build the facility. Construction is expected to take between 12 and 16 months.

The new building will include a laundry room, meeting room, exercise room, and will have secretarial staff secured behind glass like was done at the county’s new adult detention facility.

In addition to having a secure lobby, the new building will give the police space to handle interviews away from prying ears of the public, increase evidence storage abilities, and upgrade the look of the area across the street from Firth Park.

The building itself will only take up a part of the old jail’s footprint, and additional parking spots will be created in the leftover space.

The outside will likely match the current facility and the inside could simply be a polished concrete floor.

The plan is to expand property and evidence storage at the current facility – which is currently maxed out with little to no space left to utilize – and keep the detectives and investigators there, while the new facility will house administration and patrol.

The Safford City Council had been examining ways to build a new police department since 2000, with a variety of options placed before it throughout the years. The original building was built in the 1960s and initially served as an office for the Boy Scouts of America.

Former Safford Police Chief John Griffin was at the groundbreaking and said it was a momentous occasion.

“When I walked in the front door of the police department in 1981 when I signed on with the Safford P.D. we needed a new building then,” Griffin said. “So, this is a very exciting day. We’ve added on, patched and pulled things together for nearly 40 years. To finally have a new building going up for the community and for the people here is great.”

“A building is only as good as the foundation in which it is built on – Safford P.D., you are that foundation. You do a line of work today that most would not . . . Anyone can hold the helm when the sea is calm. Seas these days are anything but calm. This band of blue has not only taken the call but is guiding it through some of the roughest seas we have sailed. Chief Orr, it is my honor to put shovel to dirt and make this ship police station ready to serve the people. I stand with you guys.”

Safford got the land from the county in a deal that was approved in May 2019 by both the Graham County Board of Supervisors and the Safford City Council, the county exchanged the old jail site for setting a 25-year fixed water rate for use at the Graham County Fairgrounds to water the ball fields at $2.20 per thousand gallons while the normal industrial rate for businesses in Safford is $2.65 per thousand gallons. The county previously had a cheap water rate at the fairgrounds that expired about four years ago, and the idea of getting a new water-rate deal along with not having much use for the old facility spurned the discussion. The county currently uses about 50 million gallons of water at the fairgrounds each year.

The agreement also includes a commitment from the city to explore getting its effluent line from the wastewater treatment facility to the fairgrounds. If the city can afford to put in the effluent line, the county will guarantee to purchase $110,000 per year of reclaimed water or $2.50 per thousand gallons per year – whatever is greater.

The cost to put in an effluent line to the fairgrounds is estimated to be at about $3.5 million, which, in turn, would be paid back by the county paying to use the water.

The first two priorities for reclaimed water use will be the golf course and the fairgrounds, and the city will leave taps at the schools to use for their fields if any reclaimed water is left over. Currently, the wastewater treatment facility produces 19 to 20 million gallons per month, and reclaimed water is used only at the golf course. Any of that water that doesn’t get used at the course gets dumped into the Gila River, which the city does not get any credits for doing so.