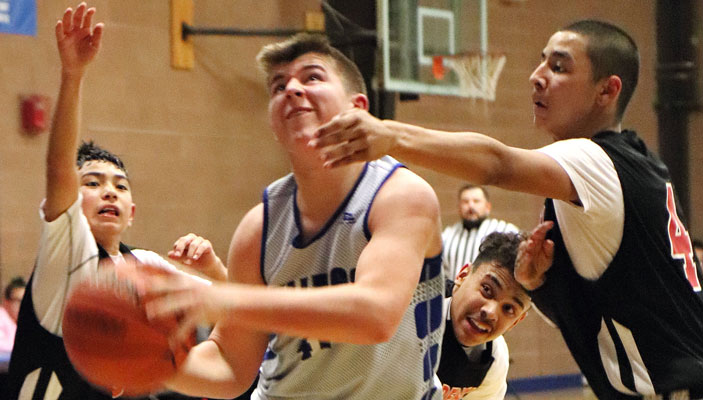 SAFFORD – As a result of playing as a team, the Safford 8th grade boys’ basketball team emerged from the three-day Eastern Arizona Athletic Association Conference tourney as champions, topping Morenci’s 8th graders 39-32 for the title Jan. 23.

A pair of Joseph Ruelas free throws broke the game’s fourth tie and sparked a 13-0 run with 4:25 left to play, vaulting the Bulldogs over the Wildcats. A Nephi Fox 3-pointer, a Ruelas field goal, two Brayden Bowman field goals, and a Ki Turner field goal accounted for the game-deciding run.

Morenci countered with a 6-0 burst in the final 1:24, but it was not enough. The Wildcats ended as runner-up for a second straight year. Morenci was second to Pima in 2019.

The score was deadlocked at 7-7 following the opening period. Ruelas and Fox field goals along with an Isaiah Alvarado 3-pointer gave the Bulldogs a 7-0 advantage before Morenci lit up its side of the scoreboard. A Melecio Briggs field goal with 2:18 left, 1-2 Donovan Vozza free throws with 1:12 left, a Tristan Sanchez field goal with 38 seconds left, and an Austin Hudman field goal 33 seconds later tied the score for the first time.

Briggs added a field goal to lift the Wildcats to 15-12 at the 4:01 mark, but a Bowman field goal 55 seconds later and Ruelas 3-pointer with 50 seconds left in the half gave the host Bulldogs the advantage.

A Ruelas 3-point play 15 seconds into the second half extended the Bulldog’s lead to five.

Morenci countered with a 5-0 run, 1-2 Sanchez and 2-2 Hudman free throws plus a Sanchez field goal during the ensuing 3:23, knotting the score at 20-20 with 2:22 left in the third period. Another Sanchez field goal 20 seconds later gave Morenci its final lead of the game, 22-20.

A Fox 3-pointer with 1:08 remaining in the third period gave the Bulldogs the edge heading into the final period.

Another Fox 3-pointer with seven seconds elapsed in the fourth period put the Bulldogs ahead by four, 26-22, but successive field goals by Vozza and Sanchez knotted the score a final time, 26-26, with 5:00 remaining.

Second seed Morenci (6-4) eliminated third seed Thatcher (6-4) in the semifinals and seventh seed Globe’s Destiny in the first round.