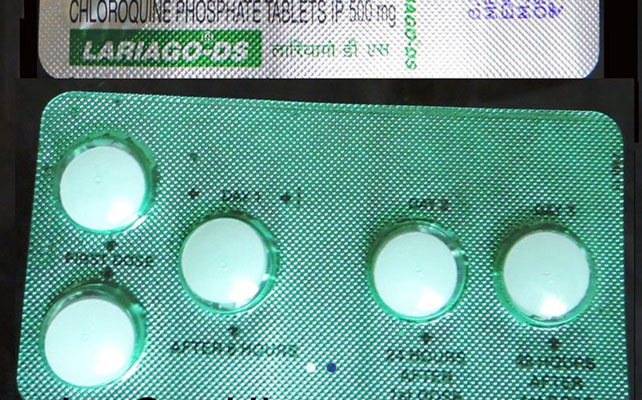 Photo By Joegoauk Goa/Creative Commons: Chloroquine has been used to treat malaria and other diseases but some – mostly notably President Donald Trump – are pushing it as a potential COVID-19 treatment. Arizona allows its use in limited cases.

TEMPE – While President Donald Trump touts an anti-malarial drug as a possible coronavirus treatment, Gov. Doug Ducey is allowing its use in limited circumstances in Arizona – dividing advocates over whether he’s gone too far or not far enough.

The debate comes just two weeks after an Arizona couple was hospitalized – and the husband died – after trying to treat themselves with chloroquine phosphate marketed as an aquarium cleaner. Chloroquine itself has been used to treat malaria and other diseases and has been mentioned as a possible treatment for COVID-19 but has not undergone rigorous testing for that.

Trump has talked about the drug repeatedly, saying as recently as Sunday that it could be a “very important answer” to the problem of the coronavirus. While the drug is not fully tested for the virus, he said, there’s “nothing lost by doing it” as long as it’s prescribed by your doctor.

Ducey issued an executive order last week easing restrictions on pharmacists in the face of COVID-19 shutdowns, but his order walked a fine line on when and how chloroquine and a related drug, hydroxychloroquine, could be dispensed.

Ducey’s order said pharmacists could dispense the drugs but only as a treatment for patients who are confirmed to have coronavirus and who have a prescription from their doctors saying as much. The order strictly prohibits dispensing the drug as a preventive measure, “unless peer-reviewed evidence citing prophylactic effectiveness becomes available.”

“We want to make sure our seniors and vulnerable populations are staying safe and physically distancing to the greatest extent possible while having access to needed medications,” Ducey said in a statement when he issued the order. “This commonsense order will also help free up physicians to focus on providing critical medical services at this time.”

That did not sit well with the Arizona State Chapter of Association of American Physicians and Surgeons, who wrote Ducey on Monday to complain that the government should not be interfering in decisions between a doctor and patient. An official with the organization also said that frontline healthcare workers should not be denied the use of the drugs if they think they might protect them from the virus.

“Ordinarily, when you write a prescription you are not required to put a diagnosis code on it,” said Dr. Jane Orient, the state association’s secretary and treasurer. “It’s outrageous that we’re expecting nurses and doctors to go expose themselves to patients and not allowing themselves to do something.”

But an official with the American Pharmacists Association said Monday “it is unclear if there is adequate data on the widespread use of hydroxychloroquine for COVID-19 prevention.” Ilisa Bernstein, senior vice president of the association, also said in a statement that the drugs need to be available for patients who take them regularly for other illnesses, like malaria and lupus.

That was echoed by Kelly Fine, CEO of the Arizona Pharmacy Association, who said that allowing the drugs to be prescribed for COVID-19 prevention would limit the supply available to patients already on the medication and those who have coronavirus. Fine, who sits on the Arizona Board of Pharmacy’s COVID-19 task force, said it recommended the limits in Ducey’s order “based on overwhelming concerns that were raised from our frontline pharmacists in the community and in hospitals.”

That authorization, along with the fact that the government now has 29 million hydroxychloroquine pills in the Strategic National Stockpile, was touted by Trump as evidence of the drug’s promise. He said officials at the FDA “know the side effects and they also know the potential.”

The Association of Physicians and Surgeons says limited tests on the drugs in COVID-19 have been promising, with 426 of the 459 patients treated with hydroxychloroquine showing improvement and only one patient dying. The association’s letter to Ducey said that health care workers who are on the front lines of fighting COVID-19 do not have time to wait for more testing.

But other medical experts have urged caution with the drug. Dr. Remington Nevin, a psychiatric epidemiologist, drug safety expert and director of the Quinism Foundation, said that these drugs have the potential to cause “irreversible brain and brainstem dysfunction, even when used at relatively low doses.”

Dr. Daniel Brooks, a medical director at the Banner Poison and Drug Information Center, said Banner Health strongly urges against prescribing chloroquine to any non-hospitalized patients. He also urged people in a statement not to self-medicate, despite what they may hear in the news.

“The last thing that we want right now is to inundate our emergency department with patients who believe they found a vague and risky solution that could potentially jeopardize their health,” Brooks said.

According to Graham County Health Director Brian Douglas, as of Monday Graham County has tested 129 patients and there are 15 tests that are pending lab results.