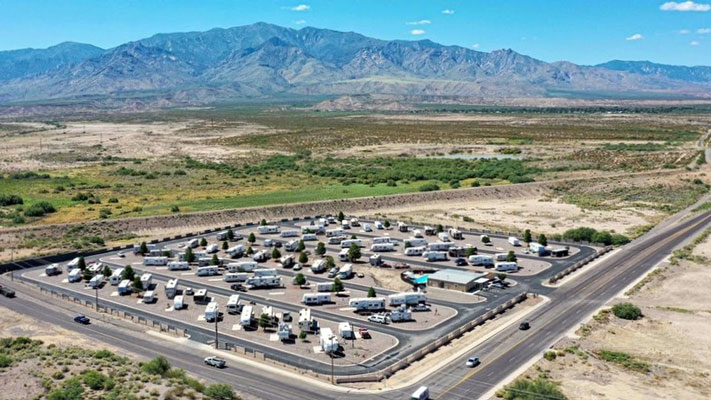 Contributed Photo: A man reported the manager of the Safford RV Park was withholding his mail.

SAFFORD – The manager of an RV Park in Safford reportedly let out an expletive-laden tirade against an officer who requested the man give him a former tenant’s mail.

On March 31, an officer was dispatched to a residence where the reporting party advised he previously lived at the Safford RV Park at 2075 Golf Course Rd. but has since moved and the process of having his mail changed was taking longer than expected. In the meantime, he said he continues to receive mail at his former address, however, the park’s manager refuses to give him his mail.

When the officer asked the manager, identified as Brent Wayne Fessler, 54, about the mail, Fessler allegedly cursed the victim and said he would not give the mail but would instead return it to the post office.

The officer then advised that Fessler could simply give him the mail and Fessler allegedly replied, “yeah, not interested.”

Fessler then reportedly repeatedly cursed at the officer and yelled at him to leave the property. Fessler told the officer he would return the mail to the post office and wouldn’t hand it over to anyone other than a postal employee. Fessler then continued to yell obscenities as the officer left, according to the report.

The officer then contacted the Safford City Attorney, who advised that Fessler could be charged with theft for withholding mail from tenants. It was also learned that Safford Police had already spoken to Fessler on two prior occasions regarding withholding mail and personal items from former tenants.

The officer then informed his findings to Safford Police Chief Glen Orr, who advised to arrest Fessler if officers made contact with him.

As the officer was exiting the police department, Fessler was walking toward the building with the intent of filing a complaint. The officer then placed Fessler under arrest. A check with the Safford Post Office showed Fessler had indeed dropped off the letter there.

Fessler was then transported to the Graham County Adult Detention Facility and was booked on a charge of theft. A theft citation was then filed the following day.

After publication, Fessler contacted the Gila Herald and denied withholding any former tenant’s mail and said he had returned all mail sent to the park addressed to nonresidents. He also said the Safford officer threatened him and that it would have been a federal offense had he given the former tenant’s mail. He said the former tenant in question had been off the property since March 3 and has been told not to return.

“Their mail, anytime it’s come in, is returned to the post office,” Fessler told the Gila Herald. “I’m not responsible to be a mail collector for people (who) don’t live here.”

Fessler also advised that he has taken pictures of when he has returned mail addressed to people who no longer live at the park and that he had returned multiple pieces of mail for the individual involved, including his government stimulus check. The victim had told the officer that he had already checked with the post office previously and there was no returned mail there for him.