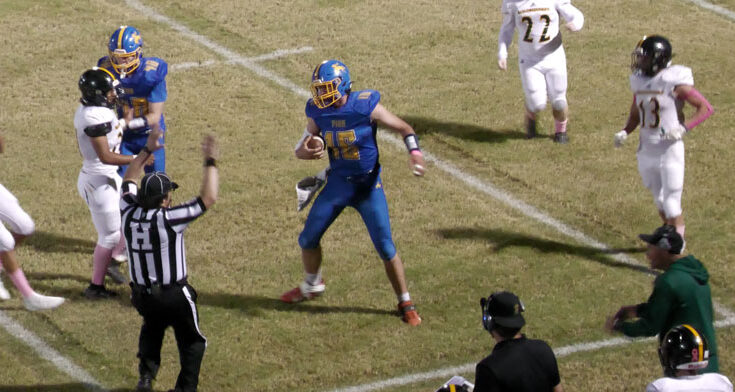 PIMA – The Pima Roughriders had eight touchdowns and only two turnovers in their 67-27 victory over the visiting San Tan Charter Roadrunners on Friday night, in a continuance over their dominance of 2A foes.

“This was a great win,” said Pima head coach Josh Wilkins. “It was senior night tonight and I’m just glad we came out and played the way they did.”

No. 2 Pima (3-0 region, 6-0 conference, 7-1 overall) has but one blemish on its record this year, a 0-19 loss to unbeaten and overall 3A No. 1 Thatcher. The Roughriders will have one more home game this year, Friday, Oct. 21, versus the Miami Vandals, before heading up to The Hill on Friday, Oct. 28 to take on No. 1 Morenci and see who will be the champion of the 2A Salt and overall No. 1-ranked team in 2A. After the regular season, both teams look to go deep into the playoffs.

Pima scored on its first three possessions, starting with a sublime grab by the lengthy wide receiver Grant Ashby from the Seth Russell offering in the back of the end zone for a 27-yard score on 4th and 11.

Good field position after an end zone punt led to a 2-yard TD plunge from Jeremiah Martinez to put the Roughriders quickly up 16-0.

However, San Tan answered with a thrilling, 94-yard kickoff return to cut the lead to 16-7. Pima rallied right back with big holes for running backs Martinez and Hayden Blair, with the latter finding the end zone on a 20-yard scamper to make it 23-7.

After Brock Haws scored a sack/fumble on San Tan’s quarterback, Pima got the ball back in good field position again. Unfortunately, San Tan’s defense stepped up and scored an interception.

The Roadrunners couldn’t do anything on offense though and had to punt it away but did reverse the field position.

That didn’t matter to the Roughriders, however, who got a 35-yard run from Wyatt Wiltbank and a big pass and catch to Sam Ray to take the ball down to the 26. Wiltbank then ran it in from there, diving into the end zone after tip-toeing along the right sideline. Unfortunately, the official didn’t see Wiltbank was indeed in bounds the entire way and called him out at the 1. Pima fed the ball back to Wiltbank on the next play, and while going into the end zone untouched he held the ball out as if stretching it out over the goal line. The official took offense and flagged him for unsportsmanlike conduct.

It didn’t seem to bother Wiltbank that much, who broke through another big run on the Roughriders’ last series before the break and scored from 5-yards out to put Pima up 38-7 as halftime hit.

Pima’s defense picked it up in the third quarter as San Tan began moving the ball through the air. Coy Miller came up with a big play and forced a fumble, which was recovered by Tucker Wilkins, who returned it 38 yards to the Roadrunners’ 28.

The Roadrunners stopped Pima’s Russell at the 1-yard line on a 4th and goal but gave up a safety when the snap went through the back of the end zone on a punt attempt. Pima scored on its ensuing possession with a 5-yard score by Hayden Blair to go up 46-7 to close out the third quarter and end the night for most of the starters.

San Tan scored three times in the fourth quarter and moved the ball up and down the field through the air. Pima answered each score with one of their own, including a big night from backup quarterback Rhett Hughes, who went 2-2 on one series with a 38-yard TD pass to Sam Ray. Ryker Shupe had a 44-yard TD run, and Jaxon John finished the scoring on the night by returning a kickoff late in the fourth quarter 84 yards to the house giving Pima a 67-27 victory.

“We just executed on all sides of the ball – everything; run, pass, we just played a great game tonight,” coach Wilkins said. “We know that there’s some big games in front of us. We’ve been competing against ourselves; we’ve been beating on ourselves during practices just trying to get ready for that long November and making a run at this. So, it’s been fun.”

Fort Thomas technically defeated Ray 1-0 by forfeit for its lone win of the season.