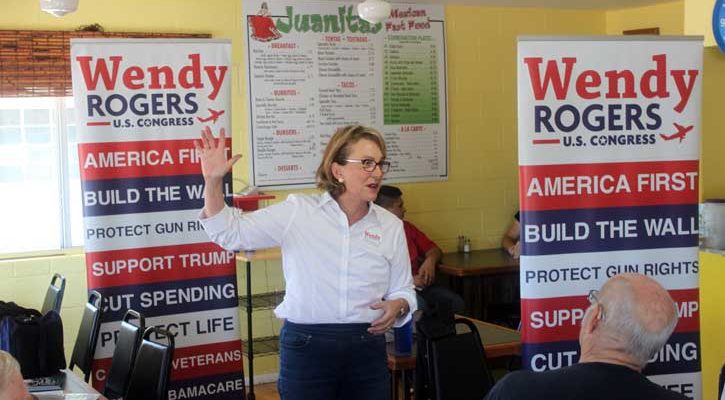 PIMA – Retired Air Force pilot Wendy Rogers has been barnstorming across the state campaigning to unseat incumbent Rep. Tom O’Halleran (D)-CD1, and on Monday, she flew her own plane into the Gila Valley for a meet-and-greet at a couple area restaurants.

One may not agree with everything Rogers says, but she sticks to her guns and stays the course. Guns, by the way, are one of her main talking points, along with building a border wall with Mexico, supporting President Donald Trump, cutting government spending, ending abortions, caring for our veterans and repealing the Affordable Care Act, also known as Obamacare. During her interaction with the public, she recalled an interview she did with CNN in which she said she was in support of overturning Roe V. Wade.

It was somewhat of an odd setting for Rogers’ lunchtime tour in Pima at Juanita’s Mexican Restaurant as those who came to see her sat in support of her speech about a border wall and supporting President Trump, while those who just came in for some food – mostly Hispanic blue-collar workers – hurried in and out without paying much heed. To her credit, Rogers welcomed everyone to visit with her and cordially answered questions from those gathered. She also had an evening speaking engagement at Jerry’s Restaurant in Safford.

Near the end of her appearance, Rogers said she feels the primary is just a warm-up for her showdown with O’Halleran in the general election and that she has the advantage because as a pilot with her own plane she can cover the vast distances of the district to campaign better than anyone else.

“I’m the best candidate because I served my country for 20 years,” Rogers said. “I have more leadership in this little finger than most candidates ever running for politics. Not only that, but I’ve been a small business owner and I still made a payroll. And those are the kinds of skills that we need in Congress today to be able to flip this seat from Democrat to Republican but also to support this president.”

“And I have an airplane. So, with my airplane, I can travel this district far more than any other candidate and have demonstrated that, and that’s what I’m doing today. I have been on the campaign trail for days, stumping, flying into all kinds of small airports and being everywhere that a normal candidate can’t. This is a huge district and it requires somebody with the energy, the vitality, the commitment to service and the servant’s heart.”