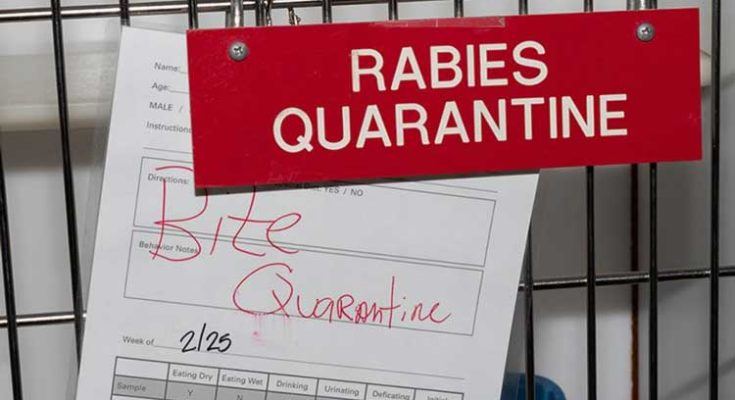 Photo By Dagnya/Creative Commons: The number of confirmed rabies cases in animals through the first five months of this year was at the highest since 2009, and state health officials say they expect cases to increase along with the summer temperature.

ARIZONA – Rabies cases in Arizona have risen sharply this year compared to the same time last year, and state health officials said the problem is only likely to get worse as the weather heats up.

There were 81 confirmed rabies cases in animals reported to the Arizona Department of Health Services through May, up from the 54 cases reported in the same period last year. And state health officials said there were another eight cases in the first half of this June alone.

Reported cases have not been this high in the state since 2009, when there were 126 cases from January to May, according to ADHS.

“It’s difficult to explain why certain years have higher numbers of rabies than others,” said Jessica Rigler, the branch chief of public health preparedness for the health department. “We do know that there is an outbreak going on in animals in southern and southeastern Arizona right now…. And so that usually drives the increase in rabies numbers in the year or two surrounding those outbreaks.”

While the numbers fluctuate from year to year, one constant has been the location: Most cases are reported in southern Arizona. That’s the case again this year with, with Cochise County accounting for 21 of the reported cases through May, followed by Pima with 16 and Santa Cruz with 15.

A spokeswoman for the Cochise County Sheriff’s Office said the department is bracing for more people encountering rabid animals.

“Our prediction is that that’s going to continue throughout the summer. We’ve had less than optimal rainfall in a lot of places, including Cochise County,” said Carol Capas, the spokeswoman. “Animals are coming into … more populated areas … looking for food and looking for water.”

The health department said foxes have accounted for most cases so far this year, with 31 reported cases, followed by skunks with 25. Historically, bats are the animals most often reported infected, but health officials expect the current number of infected bats – 17 – to rise over the summer.

The rabies virus is transmitted by a bite or contact with the saliva of an infected animal, which is common during the summer when animals venture out from their homes in the wild and into more populated areas. The virus causes severe damage to the central nervous system and is almost always fatal to non-vaccinated infected animals.

“We see a lot of puppies and kittens that have been born earlier in the year starting to develop and be out and about,” said Jose Santiago, spokesman for the Animal Care and Control Services of Maricopa County. “We see more of the homeless animals, more stray animals … (which) aren’t vaccinated, so they’re potentially more at risk.”

While rabies-related deaths in humans are extremely rare, with only one to three fatalities per year in the United States, the Centers for Disease Control and Prevention reported that about 40,000 people a year are treated for rabies nationwide. Most fatal cases occur in people who do not seek treatment, which typically happens when the infected person does not know they have been exposed.

The CDC also said that more than 90 percent of all rabies cases reported each year occur in wildlife.

The last fatal case in Arizona was in 1981, according to a Maricopa County rabies report.

The state health department said 15 people have been exposed to rabies so far this year, but none has needed treatment.

But health officials are still urging Arizona residents to take precautions against rabies. ADHS Director Cara Christ said that that includes abstaining from feeding wildlife, vaccinating your pets and keeping them on leashes, and stopping pets from interacting with wild animals.

“A lot (of) times people think, ‘My animal is an indoor animal,’ or ‘They really don’t go outside, so I don’t have to keep up with certain vaccines,’” Santiago said. “That’s simply not the case.”