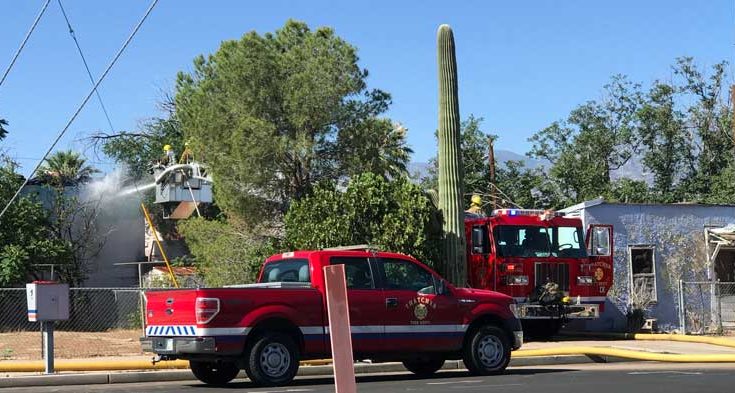 SAFFORD – Firefighters had an early morning wakeup call Monday when a garage and adjoining apartment at the Court Street Apartments caught fire.

According to Safford Fire Chief Clark Bingham, a Safford officer who had just ended his shift noticed the fire in the garage as he headed home. The officer called the fire into dispatch and broke a window to notify a female occupant in the above apartment, who then escaped without harm.

The volunteer Safford Fire Department was dispatched at about 5:28 a.m. and arrived with the garage “fully involved.” The fire then spread to the apartment above.

How the fire started, however, is still unknown.

“It is suspicious at this time and is still under investigation,” Bingham said.

Safford sent three engines to the blaze and Thatcher brought an air trailer and an engine along with its ladder truck. An air trailer fills the breathing apparatus firefighters use.

“They had a tin roof that they were afraid to get on it, so we were able to use the ladder truck to get to it, open it up and put it out,” Thatcher Fire Chief Mike Payne told the Thatcher Town Council that evening.

This article was updated Monday night to add comment from the Thatcher Fire Chief.