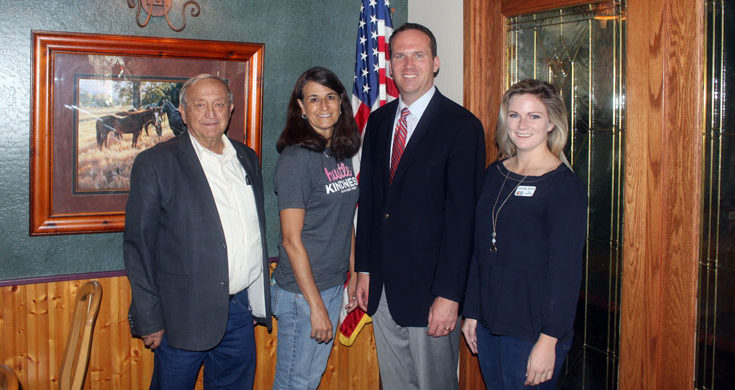 SAFFORD – The Graham County Republican Party had its committee meeting Friday and its two main guest speakers both urged party members to vote “no” on Proposition 127.

While the proposition will affect Arizona Public Service (APS), Tucson Electric Power (TEP), and cooperative customers, SRP, which is not regulated by the Corporation Commission and powers nearly 35 percent of Arizona’s ratepayers, is not affected by the initiative.

So, what is Proposition 127? The proposition is an amendment to the state Constitution that mandates Arizona receive 50 percent of its electrical power from renewable energy such as wind or solar power by 2030. The proposition and its advertising is almost entirely funded by California billionaire Tom Steyer and is intended to help clean Arizona’s air and to reduce greenhouse emissions to do Arizona’s part in fighting climate change.

During the Republican committee’s meeting, however, Lynndy Smith – a lobbyist for Arizonans for Affordable Electricity – said the proposition would not help clean the air and instead is an attack on our Constitution. She said that since the Palo Verde Nuclear Generating Station, which does not produce emissions, would not count toward the renewable mandate, the plant could be forced to shut down. Former State Rep. Justin Olson, who was appointed to the Corporation Commission by Governor Doug Ducey and is running for election to it, also was on hand and offered his belief against Proposition 127.

Why would the plant be shut down?

Nuclear power plants cannot be ramped up or throttled down like other power plants based on the electrical need. Opponents to the proposition say that due to the increase of solar power on sunny days in the fall and winter months, Arizona would have a surplus of power during the day that it wouldn’t have anywhere to send.

“This proposition essentially ensures the closing of Palo Verde Nuclear Generating Station,” Smith said. “Palo Verde Nuclear Generating Station is the number one clean energy producer in the United States – not just Arizona but the United States – and Tom Steyer is saying that they’re not good enough for the clean energy initiative. It’s also the largest taxpayer in Arizona. It pays $55 million a year in property taxes.”

The facility also employs about 3,000 people, who would have to find new jobs if the plant closed and Smith said that the closure of Palo Verde could actually worsen Arizona’s air because new natural gas plants would have to be built to supplement solar plants on cloudy and rainy days, thereby putting pollutants into the air that wouldn’t have been released by the existing nuclear plant.

Proponents to that argument say that thousands of new jobs will be added to build and maintain the new solar and wind facilities and that adequate battery storage for solar power would mean that the power would be there and ready when needed and no additional natural gas plants would be required.

According to the Natural Resources Defense Council (NRDC), the plant would stay open and still contributed to the power generation alongside solar and wind stations.

However, a study by Arizona’s Residential Utility Consumer Office notes that the initiative would cause the Palo Verde Nuclear Generating Station to become uneconomic to operate versus solar and wind generating stations around 2029, with its closure likely being the outcome.

In the end, it usually comes down to the cost of things and if it is an affordable solution. Some would argue that it is necessary no matter what the cost. A report issued Monday by the Intergovernmental Panel on Climate Change, which is made up of a group of scientists convened by the United Nations to guide world leaders, gave a mandate of a necessary 45 percent reduction in carbon emissions by 2030 or dire circumstances, including food shortages, wildfires, and massive coral reef destruction, would result due to an increase in the Earth’s atmosphere by as much as 2.7 degrees Fahrenheit above pre-industrial levels by 2040.

As far as Proposition 127 goes, Republicans have cited a study by The Seidman Research Institute, W.P. Carey School of Business, ASU that stated the average cost for residential electricity customers would increase 117 percent by 2030, for an additional annual cost of $1,936. The study was funded by APS.

Locally, Graham County Electric Cooperative General Manager/CEO Kirk Gray said the initiative would cause a 40 percent increase in rates for Graham County, which would be between $600 to $800 additionally annually by 2030.

Gray advised that while the cooperative supports renewable energy solutions and was previously number 10 in the nation for using solar power per capita, it is against the deployment of renewable mandates when it does not make economic sense to its customers. Currently, the cooperative has about 2.67 megawatts of generation from rooftop solar (including its own solar array) and that it also gets 2 megawatts of solar power from the Arizona Electric Power Cooperative, which owns the 605-megawatt Apache Generating Station in Cochise, which uses two steam units that burn coal or natural gas, one natural gas-fired boiler, and four gas turbines. The Graham County Electric Cooperative total use of solar generation makes up about 13 percent of its total energy use, according to Gray.

“Here’s the problem with this initiative is that it strands all of our generation assets,” Gray said. “We just spent over $20 million converting a coal unit to natural gas. We won’t be able to use that anymore (but) we still have to pay for it.”

Proponents for the initiative say that it will actually save money and create up to 10,000 well-paying solar jobs and that it could support an additional 15,800 full-time jobs by 2030. Those clean energy jobs would generate $1.2 billion in wages and $2.2 billion in economic activity by 2030, according to backers of the initiative.

According to an analysis by energy firm ICF, which was paid for by the NRDC, the average household bill would actually be $33 less per year by 2030. The NRDC said the real reason APS, which had profits of $488 million last year, is against the proposition is because it wants to build several new natural gas plants and that would be scuttled under the proposition’s mandates.

In the end, the actual facts and figures would mean that it residential electric costs would likely increase, at least in the near future, before lowering. Voters must ask themselves if that is the price to pay for Arizona’s part in reducing greenhouse emissions, or even if Arizona does do so, what impact will it make if other states and nations do not?