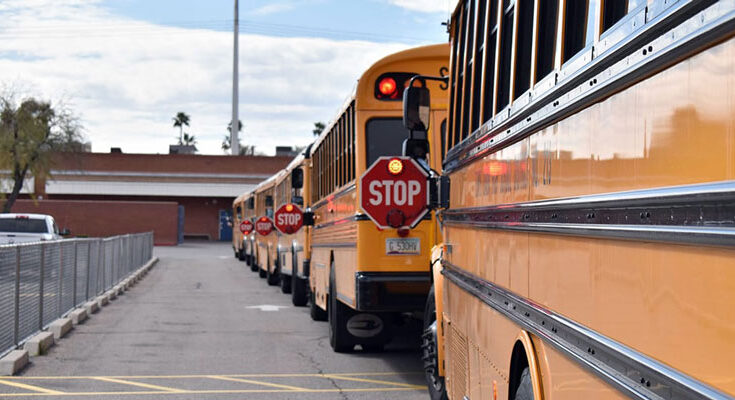 Kelly Richmond File Photo/Cronkite News: Buses line up outside Tempe High School in this 2021 file photo. The bus driver is just one of the positions that school administrators around the state say they have had trouble filling, along with teachers, nurses, custodians, secretaries, and more, as school salaries often can’t compete with the private sector.

WASHINGTON – There are many skills a school principal may need on a regular basis, but vacuuming and bus driving were probably not in the curriculum at teacher’s college.

But school staffers across Arizona may increasingly find themselves pressed to fill in on other jobs, as school districts struggle to fill positions across the board, administrators said.

The state’s longtime teacher shortage is well-known, but personnel officers said they have openings they cannot fill for everything from nurses to custodial employees, secretaries, and administrators.

The Arizona School Personnel Administrators Association reported that 26% of bus driver jobs were vacant at the start of this school year, along with 17% of cafeteria staff and 21% of physical therapists, according to a survey of 130 school districts and charter schools.

While some schools have more vacancies than others, most have some level of need, according to the association and hiring officers contacted. In the Phoenix Elementary School District, Human Resources Director Victor Diaz said there were about 70 vacancies in November.

Diaz and other human resource directors blame the vacancies on a combination of factors, the biggest being salaries that cannot compete with other industries and other states. Schools do not have the money to compete with fields that can offer a more substantial paycheck, like hospitals or tech companies, according to these directors.

“When we look at things like nurses, bus drivers, custodial staff, business offices, and human resources, we’re competing against fields that we’re simply just not on great footing with when it comes to salary,” Diaz said.

On top of that, schools also have to compete with other states, where salaries are higher and housing may be cheaper, said Clark Tenney, the assistant superintendent over human resources at Prescott Unified School District.

“If they love Arizona, they’ll stay here,” Tenney said. “If they just want to teach or work in schools, they’ll move to Colorado, make $17,000 more a year doing the same thing at housing prices that are commensurate with what they’ve got here.”

The competition for nurses is particularly fierce, even though state law does not require schools to have a registered nurse on staff. But human resource directors said having a nurse is vital, a point echoed by Melinda Weible, who runs the Arizona School Nurse Access Program at the Arizona Department of Education.

“Healthy students make the best students,” Weible said. “When our students aren’t healthy, and they don’t have access to a school nurse it makes a huge academic and social impact.”

But finding nurses who want to work in a school is tricky in a state that Weible said is facing a nursing shortage.

“Our hospitals, our clinics, and our schools are all in need of nurses,” she said. “When you look at the discrepancy and pay between hospitals versus schools … our schools really end up feeling the shortage.”

Nurses are there to take care of bumps and bruises but can also be responsible for more severe conditions and health issues like asthma or chronic illness.

Besides the health issues, however, not having a registered nurse in a school can also harm the learning environment for children – which is only aggravated when other jobs, like counselors and therapists, are not filled.

“When schools are short on staffing, one of the unintended consequences is that it feels very chaotic for students,” said Save Our Schools Executive Director Beth Lewis. “Students learn best and feel the best when they know what adult will be smiling at them.”

Diaz agreed, noting that instability can be difficult for students to deal with, especially students from low-income families.

To make up for the vacancies, schools have had to get creative with staff and resources. Sometimes that means having a custodian with a commercial driver’s license act as a bus driver for the day or having someone fill in at the front desk.

“A situation might be where an elementary school doesn’t have a custodian and the facility still needs to be taken care of,” McNeely said. “So, the principal often finds themselves vacuuming and cleaning up the school.”

Educators said they are doing the best they can for their students, but will always welcome help. The human resource directors said there are lots of roles within schools and they are always looking for volunteers.

“If you are interested in working with students or want to get involved in a local school, there’s always opportunities to volunteer,” McNeely said.