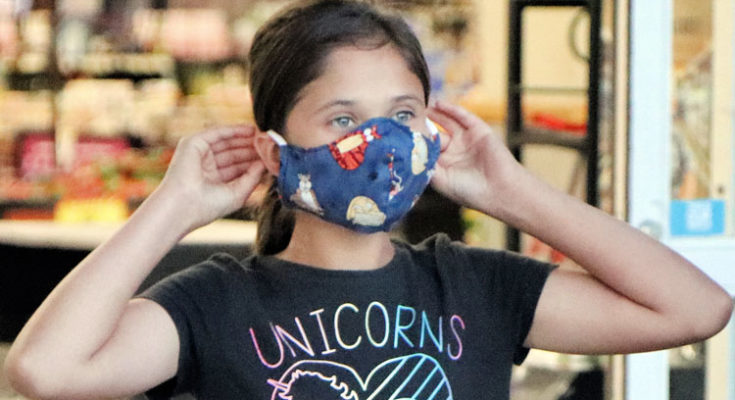 Raymundo Frasquillo File Photo/Gila Herald: A young girl secures her mask with loops over her ears. The state legislature and schools appear to be at odds over the ability to institute mask-wearing policies.

“Under Arizona’s constitutional form of government,” the letter reads, “local governments do not have the authority or power to usurp state law simply because they disagree, yet that is precisely the kind of illegal activity in which many local governments are presently engaged. The Arizona legislature, with the governor concurring, very intentionally enacted the laws at hand to protect Arizonans and Arizona children from the threat of government mandating them to wear a mask or be injected with a vaccine. Additionally, the legislature very thoughtfully attached a retroactivity clause to the law, so that there would be clear and consistent application of the statute for families and children throughout Arizona.”

The letter was released Wednesday, the same day the three major public universities announced they would implement mask-wearing policies on campus in classrooms and other areas of need. Arizona State University in Tempe first announced its intention, followed by Northern Arizona University in Flagstaff and the University of Arizona in Tucson. While Eastern Arizona College strongly encourages mask use and social distancing for unvaccinated people, it is optional and the college will not have a mask mandate at the start of this semester, according to Kris McBride, EAC director of marketing and public relations.

While the legislators who signed the letter may believe the universities are afoul of the law, those institutions don’t believe that is the case.

ASU spokesperson Jay Thorne advised that the university was in compliance with the state’s laws because the mask policy applies to everyone equally, regardless of vaccination status. He said that the legislation applicable to K-12 schools does not prohibit universities from requiring the use of masks but rather prohibits them from requiring or imposing different requirements on studies to attend classes based on their vaccination status.

However, in addition to the universities, K-12 school districts throughout the state have also advised of mask policies in apparent opposition to Ducey’s Executive Order banning mask mandates for schools and the legislation that followed. Locally, no public school in Graham or Greenlee counties has instituted any mandatory mask policy this year. The San Carlos Apache Tribal Council unanimously reinstated a reservation-wide mandatory mask mandate on the San Carlos Apache Reservation. For Fort Thomas students who live in Bylas, which is on the reservation, and staff members who service the area, masks must be worn while on reservation land but are optional when actually at school – for now.

On Tuesday, the Greenlee County Board of Supervisors unanimously voted to enact a mask mandate for the inside of its buildings, and the town of Clifton announced all town employees and visitors will have to wear a mask inside town buildings starting Thursday, Aug. 12.

The legislators who signed the letter to Ducey called on him to withhold funding to any district found to be non-compliant.

“Stated plainly, the legislature did its job by passing common-sense laws to protect the children and students of Arizona from anti-science mask and vaccine mandates, now we are eager to see the executive branch do its job to ensure that those laws are faithfully executed by the various levels of government within this state.”

“We have called upon the governor privately,” the letter states, “and are now calling upon him publicly on behalf of our constituents, to immediately take the following action:

1.  Withhold the federal funding currently under the governor’s management from any school district that is non-compliant with state law.

2.  Authorize temporary Empowerment Scholarship Accounts (ESAs) for all students trapped within any school district that is non-compliant with state law.

3.  Send a notice to all families within the boundaries of a school district that is non-compliant with state law empowering them with the following information:

b.      The availability of the newly authorized temporary Empower Scholarship Accounts (item #2 above) and how to take advantage of them.

4.  Initiate legal action against any school district that is non-compliant with state law.

The blatant disregard for the State of Arizona’s authority exhibited by the non-compliant local governments is an affront to the very core of our state and nation’s form of government.  A resounding message must be delivered to any local government or subdivision of the state considering defying state law — lawlessness will not be tolerated.”