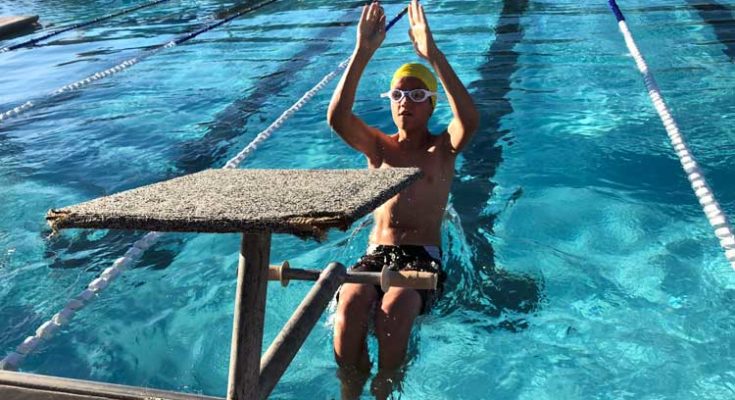 Finals to take place at Safford Pool on Saturday, July 7

PIMA – Blink and you just might have missed the summer swim team season in the Gila Valley.

The teams ended their regular season’s meets Friday night as Pima hosted Thatcher and Safford hosted Morenci. Each team swam against each other once this season.

The smell of chlorine mixed with the odiferous offerings from the snack bar in Pima, which supplied drinks, snacks, bean burros and cotton candy to the hungry crowd, well at least until the cotton candy machine decided to stop working.

The heat perhaps stifled the crowd’s enthusiasm a bit at first, but by finding shade and having the occasional spritz of water cool the bodies down, parents, friends, and well-wishers were fervent in their support for their swimmers.

The children, enjoying their literal moment in the sun, happily trotted off to their races and exclaimed with excitement when the timers informed them of how much they had improved from their previous times listed.

Once again, the sheer magnitude of Pima’s swimmers overwhelmed their competition. In the three meets this season, Pima has enjoyed roughly a 5-1 margin of swimmer numbers in most categories.

While some swimmers were extremely competitive, others were just enjoying the event and were having fun swimming, no matter what the result. Joshua Schnebly, who raced in the 9-10 boys age division for Thatcher, said he enjoyed the swim team events and expressed how much he has liked being on the swim team.

The coming of dusk announced the meet nearing its end and the crowd became super-involved in the last few categories of the night, including the 100-yard IM and freestyle events, which are some of the most competitive as well. In fact, the 11-12 girls 100-yard IM finish was too close to call, earning both girls a blue ribbon in a tie for first place.

While there is no meet for them this Friday, Pima will continue its practices as normally scheduled to continue with stroke development, starts, and practice on flip turns, including backstroke flip turns.

Schlittenhardt credits her swimmers’ work during practice as the catalyst for their improvement as the season ages.

“We have worked on their entry dives, their flip turns and those kinds of things, but we also working on technique a lot as well,” Schlittenhardt said. “I think it’s a combination of everything. They’re just working really hard and it’s paying off.”

The coaches will now tally all the times from Friday night’s meet and put them in the database with all the other times. Swimmers with the top eight times in each category will be invited to compete at the season’s finals at the Safford Pool on Saturday, July 7, beginning at 8 a.m.