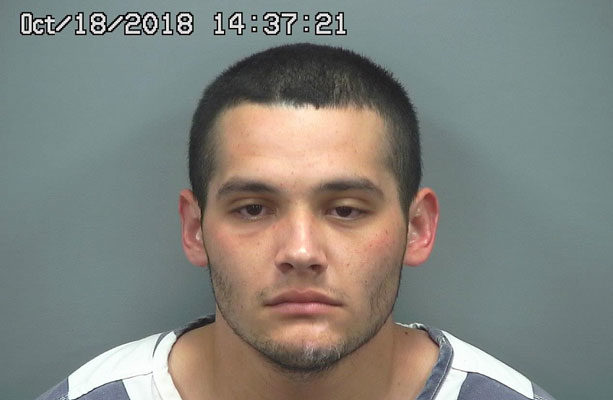 Contributed Photo/Courtesy GCSO: Antonio John Paul Rea, 22, was sentenced Tuesday to 10.5 years in prison after pleading guilty to a litany of charges.

SAFFORD – A man whose twin brother once committed murder to help facilitate his release from jail has been incarcerated on that original charge and more and will join his twin in serving a double-digit prison term.

Antonio John Paul Rea, 22, of Safford, has run from police on multiple occasions but officers won’t have to chase him again anytime soon. Rea was given a combined sentence of 10.5 years in prison Tuesday, after pleading guilty in numerous cases, including probation violations regarding guilty charges stemming from crimes from 2015.

In addition to the 10.5-year sentence, Rea must serve a lengthy term of intensive probation upon his release and faces years more in prison if he fails on probation again.

Rea was prosecuted by Graham County Chief Deputy County Attorney L. Scott Bennett and was represented by both Dennis McCarthy and Daisy Flores.

Flores was also the attorney for Rea’s twin brother, Mariceo Inez Rea, 22, who pleaded guilty to killing Manuel Espinoza III on June 25, 2015, in part to get bail money to get Antonio out of jail. Bennett also handled the prosecution of that case, and Mariceo was sentenced to the maximum aggravated sentence of 25 years after he pleaded guilty of murder in the second degree. Mariceo was also given an additional five years on a separate charge of attempted burglary in the second degree – a Class-4 felony – and trafficking in stolen property – a Class-2 felony. Due to the sentencing structure, the earliest Mariceo Rea can be released from prison is in November 2044.

According to prosecutors, Mariceo Rea encountered Espinoza the night of June 25, 2015, outside the victim’s residence at the Westpoint Apartments at 4367 S. U.S. Highway 191 at about 9:55 p.m. and fatally shot him multiple times. Witnesses at the scene said Rea approached Espinoza and demanded, “Where’s my money?” before shooting him. After Espinoza fell to the ground, Rea shot him in the back. According to the autopsy report, Espinoza suffered a contact wound to the right side of his face, with the bullet traveling out through the left side of his head, and another entry wound in his back, with the bullet traveling out through his chest.

An acquaintance of Rea’s told investigators that prior to the shooting, the suspect was high on methamphetamine and spoke about “going to get” Espinoza for owing his twin brother, Antonio Rea, roughly $200 for drugs. Antonio Rea was arrested and booked into the jail in June 2015 for possession of a dangerous drug (methamphetamine) for sale and other charges after fleeing police on a bicycle. Mariceo Rea was allegedly attempting to raise money to bail his brother out of jail.

Now Antonio will be joining his brother in prison, still in part due to that original drug charge, which was pleaded down to possession of drug paraphernalia.