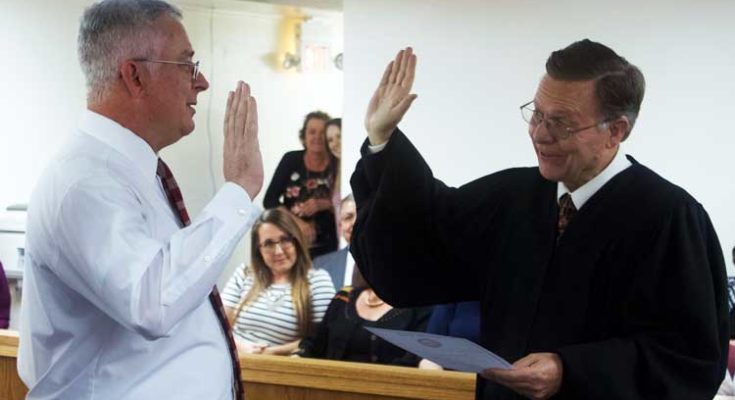 SAFFORD – It’s a good thing the fire chief wasn’t present in the E.O.C. Courtroom in the basement of the Graham County Courthouse on Tuesday afternoon because it was packed beyond capacity to witness history in the making as Graham County Superior Court Judge Pro Tem Travis W. Ragland took his oath of office.

Dignitaries from throughout Graham and Greenlee counties were on hand for the occasion, including new Graham County Manager Dustin Welker and Greenlee County Attorney Jeremy Ford. Friends and family rounded out the remaining attendees, along with what appeared to be nearly the entirety of courthouse staff and local attorneys.

Retiring Graham County Superior Court Judge Pro Tem D. Corey Sanders administered the oath to the man who will now take the seat Sanders had occupied for the past 15 years.

“I’ve learned a lot practicing in front of Judge Sanders,” Judge Ragland said. “He’s probably one of the most patient men (who) I have ever been around. I have no idea how he’s able to do that . . . I’m really honored to be here, and I just hope that I can do as good a job as he has done all these years.”

Graham County Superior Court Judge Michael D. Peterson, who started his career locally in a law practice with Sanders before he became judge and then had a practice with Ragland for 12 years before becoming a judge himself, served as the master of ceremonies. He said since he is likely the only person in the whole world who has worked side-by-side with both Sanders and Ragland that he has a unique position to see how well the transition will likely be.

“(Judge Sanders) has been an excellent resource to our community and really someone who has created a lot of value and done a lot of good things,” Judge Peterson said. “And I think that you will find that Travis will pick up right where he has left off.”

“I think he’ll do a real good job, and I can’t wait to see him and Judge Peterson working together,” Ed Ragland said. “Mike really came in and hit the ground running and started doing some things that I thought were really good. And I know he and Judge Sanders were on the same wavelength. I think they’ve done a lot of work to make it a smooth transition.”

After being sworn in, Judge Ragland’s mother, Monica Ragland, and grandmother, Mildred Carson, helped fit him into his robe and he received a mesquite and catclaw gavel and sounding block inlaid with copper and turquoise handmade by his wife, Karen Ramirez-Ragland, which took her between 35 to 40 hours to complete. Ramirez-Ragland also made a gavel for Judge Peterson after his initial appointment. That one is made of oak.

Monica Ragland said her son has the even-keel personality that it takes to be an effective judge.

“I’m so proud of him,” Monica Ragland said.