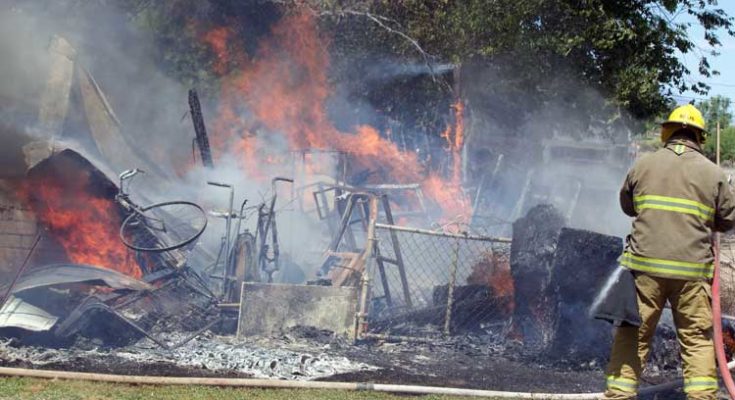 PIMA – The quick action of neighbors and civilians who happened to be in the area coupled with the timely response and water power of the Pima Fire Department saved residences from a fire Tuesday morning.

A fire erupted after some type of explosion in a greenhouse at 94 W. 400 South a little before 10:30 a.m. The initial cause of the fire is under investigation.

Jay Curtis of Curtis Landscaping was working nearby when he saw the smoke. He immediately responded to the area with his crew and provided assistance as one of the first on the scene.

“We saw the smoke and looked to see what was going on,” Curtis said. “Something didn’t feel right and we came running. They (neighbors) were trying to get the dog unchained and save the house.

Curtis and his employee began dousing the fire with a garden hose, but when it continued to grow he and other residents who responded to the area helped remove several vehicles from the residence’s carport area. Those who assisted included town employees, such as Pima Town Manager Sean Lewis, and Public Works Director Dennis Lines; Pima Mayor C.B. Fletcher and others. Local resident Daniel Wilson said he was walking down the road when he saw the smoke and immediately went to help out of a sense of duty to his neighbor.

The fire started in the greenhouse and spread to an adjoining storage building while burning wood piles and other items. But the volunteer Pima Fire Department stopped it in its tracks and saved the house from damage. Later, the Thatcher Fire Department also arrived and provided assistance.

Mandee Curtis, an immediate neighbor to the west, said she heard a loud explosion and then noticed the fire. She said she saw Pima Police Chief Diane Cauthen running through her backyard after two men dressed in orange (the Curtis Landscaping employees) and thought at first that she was chasing inmates. She then noticed the fire and retrieved her dog from the yard.

“When I went out to get my dog that fire was roaring,” Mandee Curtis said.

The homeowner said she smelled smoke in the air when she was in the backyard shaking her rug but didn’t think anything of it. She went back inside her home and heard the explosion but didn’t know where it came from.

“I went back in and then I heard a big boom and then somebody was banging on my back door,” she said.

The resident and her dog were both led away from the fire and no injuries were reported at the scene.