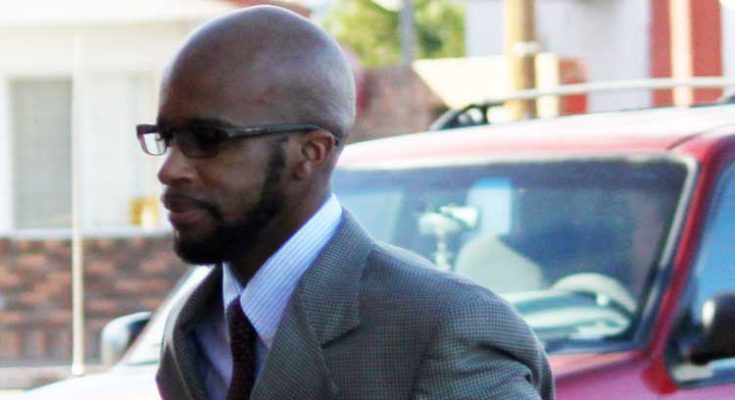 Jon Johnson Photo/Gila Herald: Salih Abdul-Haqq Zaid makes his way to the courthouse elevator before his murder trial resumes Thursday morning. Zaid is accused of shooting Jared Garcia to death after an altercation at a local bar.

SAFFORD – The 16-member jury began to hear the defense’s side of things Wednesday afternoon, after the prosecution rested its case against Salih Abdul-Haqq Zaid, 40, after roughly six days of proceedings and more than 50 exhibits.

Graham County Chief Deputy County Attorney L. Scott Bennett used a myriad of multi-media sources to help present the state’s case to the jury, including having flat screen televisions placed at each end of the jury box and a projector in the middle directly across the room from the jury. That is how the jury watched videos, such as the police interrogation video.

The prosecution also called various witnesses to the stand during its presentation, including detectives Bill Wren and Josh McClain, who were two of the lead detectives on the case.

Zaid is accused of shooting Jared Michael Garcia, 35, to death outside of the Bull Pen bar at 912 W. Thatcher Blvd. with an AK-47 assault rifle loaded with a 30-round magazine in the early morning hours of April 26, 2017. The shooting came after Zaid got into an altercation with Garcia inside the bar. Zaid left the bar in his truck, went to his residence and returned abruptly and called Garcia over to his truck, where Garcia was then shot, allegedly while raising his hands and turning to run away. Zaid is being held in custody on a $1 million bond and is charged with first-degree murder, aggravated assault with a deadly weapon, aggravated assault, endangerment, disorderly conduct with a weapon, and discharging a weapon within city limits.

Despite the Gila Herald’s efforts, Graham County Superior Court Judge D. Corey Sanders has ruled against allowing cameras or recording equipment in the courtroom. Judge Sanders said to do so could somehow cause a danger to the defendant. The Gila Herald will continue to cover the proceedings under the First Amendment, however, just as it would have with the exception of video and pictures from inside the courtroom. The Gila Herald did catch Zaid entering the elevator of the courthouse early Thursday morning. The defendant looks much different than when he appeared for his preliminary hearing in a jail outfit and in shackles. Gone are the shackles and Zaid is well-dressed in a different suit and tie every day and now adorns glasses as well.

On Wednesday, the state rested its case at about 2 p.m. and Zaid’s defense attorney, Dennis McCarthy, began his turn.

One of the first witnesses McCarthy called was a fellow flight paramedic who worked with Zaid at Phi-Air Medical, which runs the Air Evac-21 helicopter out of the Safford Regional Airport.

The co-worker advised Zaid formerly worked for the company in Saudi Arabia, but that contract was canceled and he was relocated to Safford. He also advised that the two had become friends and liked to go hunting for quail and fishing together. The co-worker said Zaid had taken his AK-47 with him while quail hunting, not to shoot the quail but to just sight them in for him. The man said he was an avid outdoorsman and listed off a myriad of weapons he owned, including several shotguns, rifles and at least one handgun.

McCarthy asked the witness if he ever saw the AK-47 in Zaid’s truck in an apparent attempt to convince the jury that Zaid already had the weapon in his truck the fateful night of the shooting and that he didn’t go back to his apartment and retrieve it with the intent of going back to the bar to shoot Garcia as the prosecution asserted.

The witness said he had seen it in the truck in various positions roughly two to five times before but couldn’t be sure. On cross-examination by Bennett, the witness admitted that he hadn’t seen the inside of Zaid’s truck for at least a week prior to the April 26 incident and therefore could not say whether the gun was already in the truck when Zaid was initially at the bar.

The proceedings closed just before 4 p.m. on Wednesday and the defense continued its case the following morning. After the defense rests, the prosecution will be allowed its rebuttal before closing arguments are heard from both sides followed by jury instructions. The fate of Mr. Zaid will then be up to the jury.