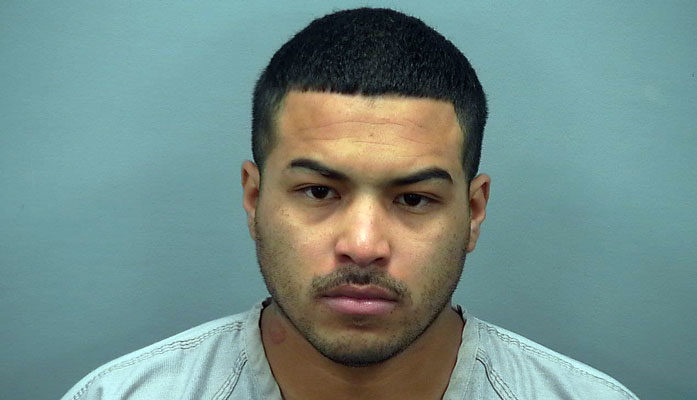 SAFFORD – Officers located an assault suspect hiding in the attic of his residence the morning of April 15 after they were alerted to his whereabouts by the suspect’s probation ankle bracelet.

After coming out of the attic, Michael Young, 23, was arrested and booked into the Graham County Adult Detention Facility on charges of assault, disorderly conduct, unlawful imprisonment, preventing the use of a telephone in an emergency, and a probation hold.

Officers were dispatched to a residence in the 900 block of E. Hollywood Road at about 7:39 a.m. regarding a domestic violence situation. Upon arrival, an officer located a female victim with blood on her lower lip and abrasions to both her knees. The victim also advised her right wrist felt as if it was sprained and informed the officers that she was 11 weeks pregnant and that her husband, identified as Young, had assaulted her in the bathroom after she told him she wanted their marriage annulled so she could move and look for work elsewhere.

At that time, Young allegedly threw the victim to the ground and then covered her mouth to silence her screams. The victim attempted to use her cell phone to call the police but Young took it from her and threw it to the corner of the room, according to her statement to police. Young later left the residence in a black Chevy Silverado pickup truck.

The victim advised Young was on intensive probation and had an ankle monitor. She also said he likely went to either his grandmother’s residence or his friend’s residence.

While one officer contacted the probation department to notify them of the situation, another officer went to the friend’s residence and noticed a black Chevy Silverado pickup truck parked in the back which was registered to Young.

The occupant of the residence said he just returned home after dropping his children off at school and that Young was not there. However, a probation officer advised that the GPS from the ankle monitor showed Young was at the residence.

The occupant allowed the officers to search the residence but Young was still not located. A probation officer then arrived and searched the residence as well without success.

The probation officer then pinged Young’s ankle bracelet and the officers could hear it go off in the attic.

Young then surrendered and denied injuring the victim or taking away her phone. However, he did admit to holding her down, according to the police report. Young also said they had gotten into an argument the previous night when he advised he was going to leave her and said the victim pulled a knife out on him and wouldn’t let him leave. He said the victim must have gotten her injury when she “fell” in the living room.

Young was then arrested and booked into the jail on the above-listed charges.