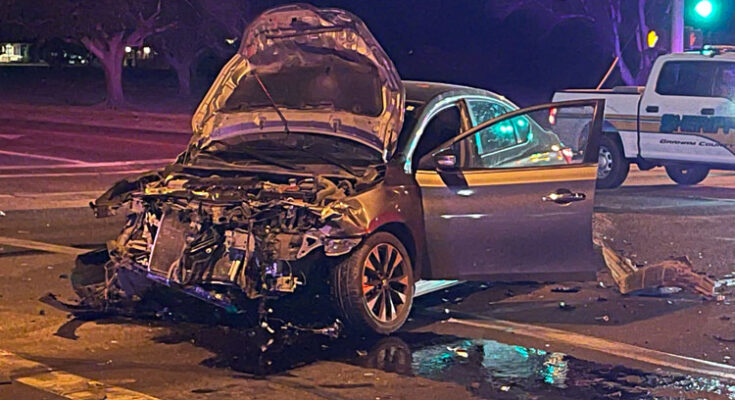 Jon Johnson Photo/Gila Herald: This car suffered severe front-end damage after being involved in a collision with a police vehicle Friday night.

THATCHER – A police-involved collision at the intersection of U.S. Highway 70 and Third Avenue in Thatcher closed the highway in both directions Friday night.

Traffic was routed to side streets for a couple of blocks to avoid the crash area.

According to a person at the scene, a vehicle was stationary facing northbound on Third Avenue when the driver reportedly received a green light.

At the same time, an eastbound Thatcher Police vehicle on U.S. Highway 70 reportedly went into the intersection and struck the car. A second car was also struck and went up on the sidewalk. The information is preliminary and the incident is being investigated by the Arizona Department of Public Safety. In addition to Thatcher Police and DPS, the Graham County Sheriff’s Office, and the Safford and Pima Police departments were on scene to assist as needed. Thatcher Police Chief Shaffen Woods advised that the police vehicle involved in the collision was not involved in a pursuit at the time of the crash.

On Saturday morning, Woods issued a press release advising that two Thatcher Police officers were responding to back up a third officer who was conducting a traffic stop on a subject who reportedly brandished a firearm at another driver.

The first officer went through the intersection cleanly, however, the second officer’s vehicle collided with the car, which was not involved in the instigating incident.

The resident’s car suffered extreme front-end damage and was in the middle of the intersection after the collision. The driver was examined by paramedics with Lifeline Ambulance but did not appear to suffer any serious injuries. A family member spoke with the Gila Herald at the crash site and advised the driver would be alright.

“Thankfully, there were no serious injuries reported at the scene,” Woods said in his release. This collision is under investigation by the Arizona Department of Public Safety. We appreciate the other law enforcement and EMS agencies that responded to the scene.”

This article was updated Saturday morning to include information from Thatcher Police Chief Shaffen Woods.