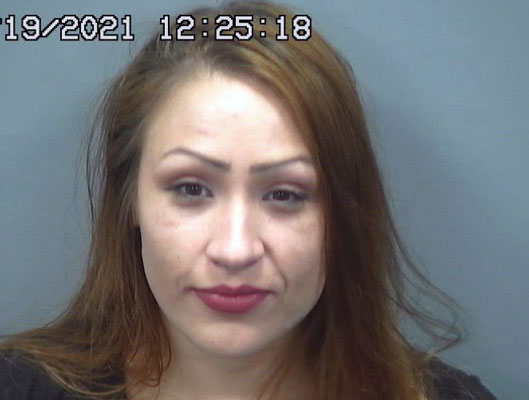 Contributed Photo/Courtesy GCSO: Mariah Gonzales, 26, was arrested on an outstanding warrant and suspicion of DUI and possession of drug paraphernalia.

SAFFORD – A woman who was wanted on an outstanding theft charge was taken into custody after being seen leaving a residence known for drug activity. The driver also faces possible DUI charges.

Mariah Timica Nicol Gonzales, 26, was arrested July 9 for DUI, possession of drug paraphernalia, and her warrant. After the completion of a DUI investigation and gathering a sample of her blood, Gonzales was booked into the Graham County Adult Detention Facility on her warrant, with possible DUI charges pending lab test analysis and review by prosecutors.

According to a Safford Police report, an officer was southbound in the 900 block of 1st Avenue at about 2:17 p.m. when he observed a red Chevy Aveo leave a residence known to the officer as having drug activity.

Officers followed the Chevy as it parked at the Circle K at the intersection of Relation Street and 1st Avenue and were going to “make consensual contact” with the two subjects in the car when the officers noticed the cracked windshield.

The two subjects were identified as Mariah Gonzales as the driver and Alfredo “Gordo” Gonzales as her passenger. After conducting a records check, County Dispatch confirmed a warrant for Mariah and she was placed under arrest.

At that time, Mariah allegedly gave the officer consent to search her purse and two syringes containing a brownish liquid were on top of the other items in the purse.

Mariah advised the syringes were not hers but Alfredo’s and that he must have placed them in her purse. Alfredo denied knowledge about the syringes, and both Alfredo and Mariah showed intravenous track marks on their arms.

Mariah later admitted that she injects fentanyl and had recently smoked a blue M30 counterfeit Oxycodone pill (containing fentanyl) and some methamphetamine. She still, however, denied the needles were hers.

Alfredo reportedly consented to a search of himself and a plastic pipe with black residue was located. Alfredo was given a long-form charge of possession of drug paraphernalia and was released.

After failing a field sobriety test and submitting a blood sample, Mariah was booked into jail on her warrant.