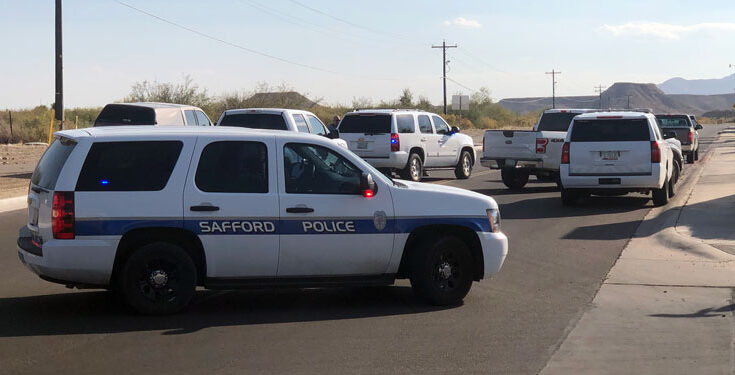 Jon Johnson Photo/Gila Herald: Numerous police vehicles from multiple agencies close off Hoopes Avenue in Daley Estates on Wednesday while dealing with an intoxicated and suicidal subject who was in a shed.

THATCHER – A dangerous situation with a reportedly intoxicated and suicidal subject ended peacefully Wednesday after authorities cordoned off the area of Hoopes Avenue between Brinkerhoff and Kimble streets on Wednesday.

According to a Thatcher Police news release, officers responded to the area in Daley Estates at about 1:22 p.m. regarding a request for a welfare check on a male subject.

The man was reported to have made suicidal statements and was heavily intoxicated. He was also last known to be in a shed in the backyard of a residence with access to multiple firearms.

Officers, including those from the Pima and Safford police departments, set up a perimeter and began taking other precautionary measures. At about 2 p.m. an officer flew a drone over the area to receive a bird’s eye view of the scene.

After a while, officers managed to get the man to come out of the shed without further incident, and the was secured at about 2:45 p.m. The man was then transported to the Mt. Graham Regional Medical Center, where he was treated for his injuries and evaluated by mental health professionals.

“We are thankful that this situation was able to be resolved quickly and safely for everyone involved,” said Thatcher Police Chief Shaffen Woods in the release. “We appreciate the amazing working relationship we have with all the local law enforcement agencies as well as Lifeline Ambulance and the staff at the Mt. Graham Regional Medical Center. Once again, this situation was resolved successfully because of this team of professionals.”

“Thank you to everyone (who) helped make this situation as safe as it could be under the circumstances and we apologize for any inconvenience this may have caused the public.”