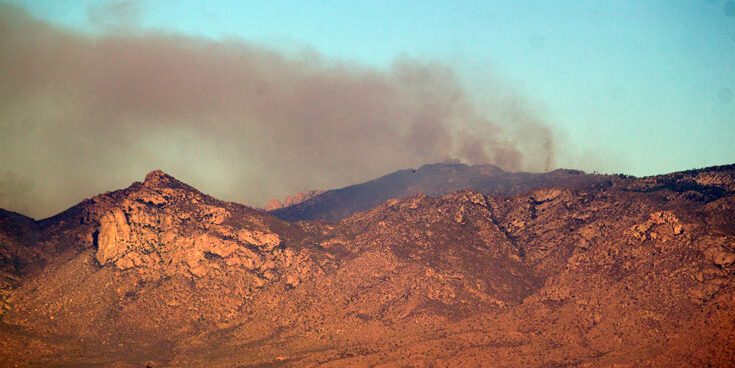 Jon Johnson Photo/Gila Herald: Smoke billows from the Pinnacle Fire on Friday morning. The fire has burned more than 1,800 acres in the Santa Teresa Mountains.

SANTA TERESA MOUNTAINS – The Pinnacle Fire grew from 300 acres on its first day to more than 1,800 acres as of Friday morning.

The fire began Thursday at about 12 p.m. and is burning grass and brush in the remote area of Cottonwood Canyon near the Santa Teresa Wilderness. The area is north of Klondyke and west of the Gila Valley.

The Southwest Incident Management Team Type 2 has been ordered to take over fighting the fire. As of Friday morning, an update listed just 30 personnel battling the fire by attempting indirect engagement. Aerial resources are scheduled to join in the effort. The cause of the wildfire is under investigation.

As of Friday morning, the Telegraph Fire was listed at 86,529 acres with 40 percent containment. U.S. Highway 60 between Superior and Miami remains closed, with a detour utilizing Highway 188 through Roosevelt Lake.

The fire is listed as being human-caused. It began June 4, about one mile south of Superior.

As of Friday morning, the Mescal Fire was listed at 77,250 acres with about 77 percent containment.

The cause of the fire is under investigation. It began June 1 roughly 12 miles southeast of Globe.