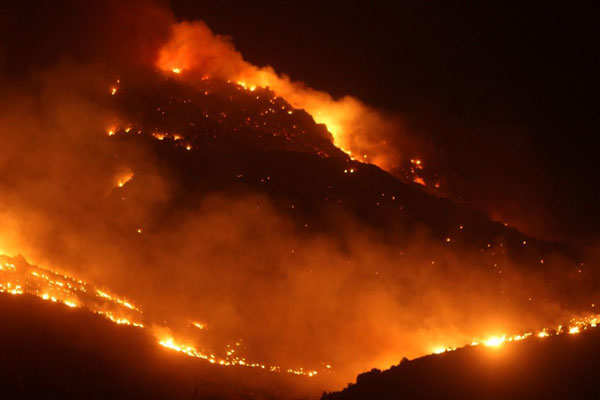 Photo Courtesy InciWeb: The Pinnacle Fire has grown to 26,460 acres with 10 percent containment.

SANTA TERESA WILDERNESS – With fire behavior calming, residents north of the Aravaipa/Klondyke Road were allowed to return to their homes Thursday evening.

An evacuation notice still remains in effect for residences in the Black Rock Road area and in the Klondyke-Aravaipa corridor.

According to a press release, the fire’s steady northwest movement slowed when it entered terrain composed of numerous ledges and rocks in the Santa Teresa Wilderness. As the fire works its way out of this inaccessible area, firefighting efforts will be evaluated. Due to the increased size to 26,460 acres, the percent of containment has lowered to 10%.

On the northern side in the Black Rock area, the fire has barely moved since Wednesday and is stalled above the Black Rock Ranch, according to the release. Additionally, burnout operations during Wednesday and Thursday nights have held the perimeter near Klondyke, protecting homes in that area.

As previously reported by the Gila Herald, the eastern flank has remained calm and that is the portion of the fire determined to be “contained.”

The fire began June 10 and its cause is still under investigation. A total of 444 personnel are currently assigned to the fire, which is utilizing aerial resources as well as a number of different ground resources. The area is temporarily closed per order by the Coronado National Forest and Bureau of Land Management, and a temporary flight restriction has been issued around the perimeter of the fire as well.