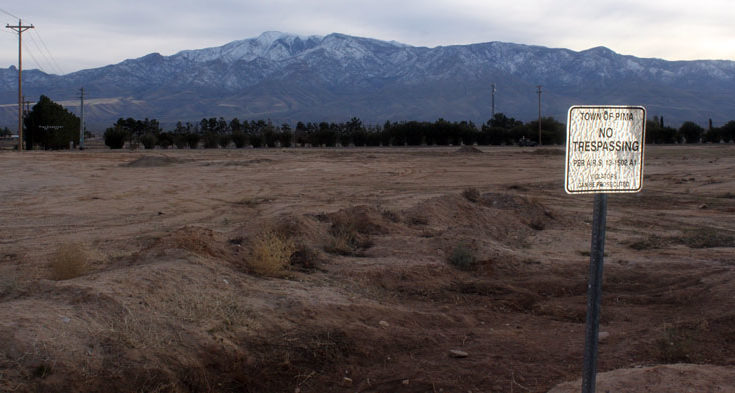 Jon Johnson Photo/Gila Herald: The Cottonwood Crossing Subdivision has been approved with 30 available lots for homes to be built on this land between 700 South and 800 South off 400 West in Pima.

PIMA – The town of Pima has long been one of the smallest of the main municipalities in Graham County, however, unprecedented population growth and the availability of more real estate and area to expand may change that fact.

During the January Pima Town Council meeting, the council unanimously approved the final plat for the Cottonwood Crossing Subdivision, which allows the sale of 30 new lots between 700 South and 800 South off 400 West, just north of the Pima Cemetery. The plat calls for the construction of a new street, 750 South, that will run directly down the middle of the subdivision and act as the ingress and egress for 18 of the lots. The lots are about a quarter-acre, allow one home per lot and will be on the town of Pima’s sewer system.

A second subdivision at Ferrin’s Corner is expected to be approved by Pima’s Planing and Zoning committee in February, and that will contain larger lots. A subdivision was planned in the area previously before the housing bust, and this one is a different plat with different owners, according to Lewis.

In addition to the new subdivisions, homes are also still being built in existing subdivisions of Pima South Estates, which is nearly filled, and Alder Heights on the east side of town. Roughly 70 new homes were constructed in the past two years in Pima, and there are currently about 20 that are under construction or have been approved to be built.

Numbers like that have Pima Town Manager Sean Lewis believing the upcoming census will reveal a much larger population jump than previously believed. He told the PIma Town Council that he thought the 2010 Census was not an accurate count (showing roughly 2,400 residents in Pima) and that the new count this year could show that Pima actually now has about 4,000 residents. He also added that the town would be very proactive in assisting with the census, since an accurate count will be beneficial as towns and cities are allocated funds due to their population.

Business in PIma is also growing along with the residential side, as new businesses either expand into new locations like with the Optimal Health Centre, which employs about 40 people at its central location off U.S. Highway 70, or start anew, like the new business slated for construction just east of the Pima Post Office. (The Gila Herald will have an exclusive on that business in the coming weeks.) According to Lewis, there are also several businesses that are chomping at the bit to open up shop in a planned industrial area near the Pima Cemetery off 1200 South.

With the additions of new businesses, the town will help PIma be more than just a “bedroom community” where residents commute to work elsewhere and keep revenues pouring into the town and important infrastructure facilities, such as the Graham County Electric Cooperative, which provides utilities to the area.