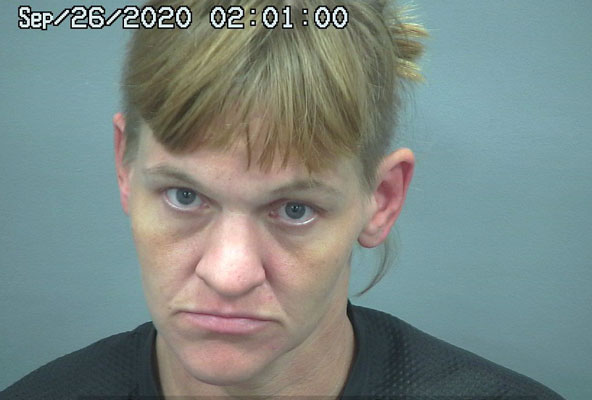 Contributed Photo/Courtesy GCSO: Katherine Payne was booked into the jail on a charge of child abuse after her 3-year-old son rode on the bumper of an SUV she was in for nearly a mile.

Woman expected of methamphetamine use

PIMA – Katherine Payne, 39, of Pima, was arrested Friday, Sept. 25, and booked into the Graham County Adult Detention Facility on a charge of child abuse after her 3-year-old son rode on the bumper of an SUV for nearly a mile.

According to a Pima Police report, Payne was reportedly unaware that the boy had climbed onto the bumper/trailer hitch area and rode there from their residence at 490 S. 100 East all the way to the Speedway gas station at 325 E. U.S. Highway 70, which is .8 of a mile away.

An officer was dispatched to the gas station at about 7:55 p.m. concerning a welfare check on the child. Once there, a man said he and his wife saw the child riding on the bumper of an SUV while the vehicle drove into the gas station. The witnesses said Payne was a passenger in the vehicle and a male who allegedly had bloodshot eyes was driving.

One of the witnesses reported running toward the vehicle and shouting ‘oh, my God,” which scared the child, who then hopped off and ran toward the gas station entrance. That drew the attention of Payne, who gathered up the toddler and scolded him while she placed him into the back seat of the SUV.

A clerk at the gas station advised she didn’t see the child on the vehicle but overheard Payne laughing about it and that Payne said, “I can’t believe he drove down all the way on the bumper of the truck.”

The officer responded to Payne’s residence and located a 1997 GMC Suburban that matched the witnesses’ description of the vehicle. However, Payne’s sister said she was not at home and that she had gone to bail a man out of jail but had gotten stopped by Thatcher Police. The Pima officer contacted the Thatcher Police Department and learned that a DPS trooper had stopped Payne at the Twin Palms area in Thatcher. The Pima officer then requested Payne be held and that he would respond to the location. Prior to leaving, the sister advised she told Payne that the child was out and that Payne had been losing track of her children recently, possibly due to methamphetamine abuse.

Upon arrival in Thatcher, the Pima officer placed Payne under arrest for child abuse. Payne allegedly told the officer that she had put the child in the house before leaving and thought he was still in there. She also allegedly advised that she was dealing with substance abuse and was trying to get help.

Payne was then transported to the jail and booked on a charge of child abuse. Her children were left in the care of her sister, and a Department of Child Safety investigation was begun.