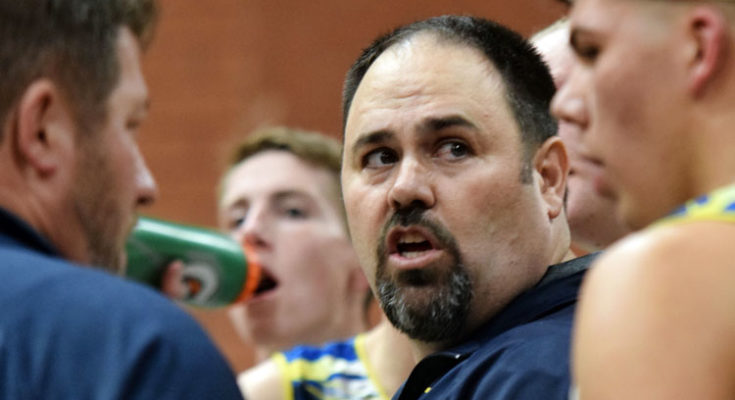 Will face winner No. 3 Globe

“I wouldn’t want to have to play us.”

PRESCOTT – That’s what Pima head coach Cliff Thompson said while his team was on the short end of the stick during a few close regular season games. Pima finished third in the 2A East Region and runner-up in the 2A East Regional Tournament, but it is now making waves in the state tournament on its quest for a golden basketball.

The No. 11 Pima Roughriders flexed their strength down low and upset the No. 6 Tucson St. Augustine Catholic Wolves 61-40 at Yavapai Community College on Friday morning.

The Riders will now face No. 3 Globe, which beat No. 14 San Manuel 89-75. The game will be played at YCC on Saturday, starting at 1:30 p.m. Globe features the state’s all-time leading scorer, Robert Burries Jr., who just dropped 52 points on San Manuel.

The game was the opener for the boys 2A State Tournament. The Riders moved up a spot in the rankings and avoided having to face Morenci for a fourth time this season (so far) after beating Scottsdale Prep 53-41 in Pima on Wednesday during the tournament play-in game and No. 11 ranked Camp Verde being upset 76-72 by No. 22 Gilbert Classical.

Morenci will take on Thatcher in a 2A East Region matchup in the quarterfinals at YCC on Saturday, starting at 4:30 p.m. That scenario will, of course, guarantee at least one 2A East Region team to make it to the semifinals next week.

The Riders jumped all over the Wolves early on, taking an 8-1 lead to open the game and pushing it to 15-5 by the end of the first period as Pima’s defense stifled the normally potent offense of St. Augustine.

The Wolves began to claw their way back in the second period, however, as they continually triple-teamed Pima’s all-everything center, Dawson Pruszynski, who had to take a seat due to foul trouble and found the pine with three fouls late in the second period.

Pima only mustered six points in the second period, but still led 21-15 at halftime.

Pruszynski came back with a purpose in the third and propelled Pima to open up its lead as he scored at whim down low. The Roughriders doubled the amount of points they had at halftime in just the single period as both offenses started to hit. Pima just scored a lot more and took a 42-27 lead heading into the fourth period of play.

“Dawson was really key for us beating the trap,” Cliff Thompson said. “We moved him out on the perimeter in the third and fourth quarters quite a bit, and he (was) able to see over those traps and delivered. I don’t know how many assists he had but it had to be five or six at least.”

“We’re not always the best shooting team, but we pride ourselves on defense and just playing hard,” Cliff Thompson said. “If we don’t win the game then there’s something seriously wrong if we out rebound somebody that bad. I don’t think we let them have a second shot more than once or twice the entire game.”

The Roughriders then kept pace offensively with the Wolves in the fourth, never letting St. Augustine close the gap and utilizing the spread offense to whittle the time down.

Pima opened the bench at the end of the game to give its reserves some playing time, and moved into the second round with the 61-40 win.

This article was updated at 8:45 p.m. to include scores from later games.