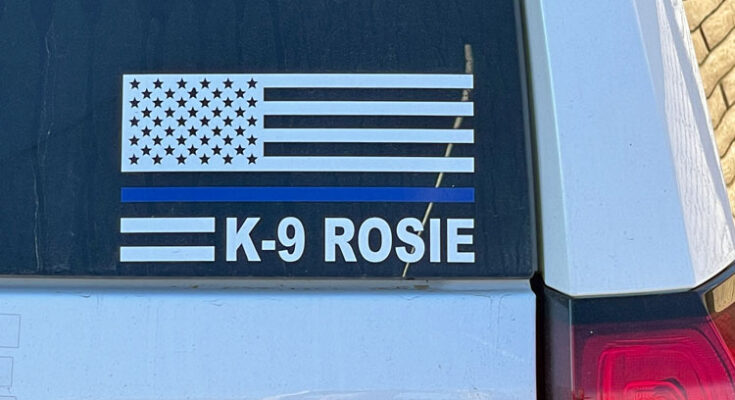 Jon Johnson Photo/Gila Herald: The Pima Police Department is retiring its K-9 “Rosie” and will sell her to her handler for $1.

PIMA – The passage of recreational marijuana (cannabis) in Arizona was listed as one reason for the retirement of the Pima Police Department’s drug-sniffing dog.

During the Pima Town Council’s Tuesday night meeting, the council unanimously voted to accept Pima Police Chief Diane Cauthen’s recommendation to retire its K-9 “Rosie” and sell her back to her handler, Pima Police officer Billy Masten, for $1.

During her presentation to the council, Chief Cauthen advised that while Rosie is trained to detect methamphetamine, heroin, and cocaine, as well as cannabis, the dog does not differentiate between the drugs when alerting to a positive reaction. Cauthen advised that a foreseeable future case could involve Rosie indicating a “hit” on a vehicle carrying one of the three hard drugs mentioned, but if cannabis was also present the defendant may argue that the dog’s positive was from smelling the cannabis – a now legal product in Arizona – and could result in having the search of the vehicle and subsequent hard drug charges thrown out by a judge.

“I just don’t want to become case law where we have to go all the way to the Supreme Court and fight it,” Cauthen told the council.

“She hits the same no matter what drug it is. But because marijuana is legal now, I don’t want to get into that fight.”

Cauthen advised that in the past the Pima Police Department sold its former drug dog “Rico” back to its handler for $1 after the dog was retired for age. Rosie came from a high school in the Valley and is about 9 years old, according to statements made by Cauthen to the council. Pima purchased Rosie for $1 from the high school.

Cauthen also advised that she isn’t looking at replacing Rosie since the county has a drug dog trained in dual-purpose and Thatcher is going to receive a drug dog that is not trained to detect cannabis. She said law enforcement from the other municipalities and county share resources without compensation and that if they needed a dog for a drug search Thatcher or the county would send their dog if possible. In the past, Pima would send Rosie to assist other agencies when needed as well at no cost. The county has also previously sent its dog to Pima to track down a burglary suspect, according to Cauthen.

“I feel comfortable with two dogs in the (Gila) Valley that if we need somebody we can call them out,” Cauthen said.

Cauthen added that while Rosie is a tool, there are other tools available to law enforcement to get a search of a suspect vehicle and that it makes better fiscal sense not to replace the dog. She advised that running Rosie costs 12 to 16 hours of overtime each month due to certification requirements and that the town only averages about three K-9 searches per month.