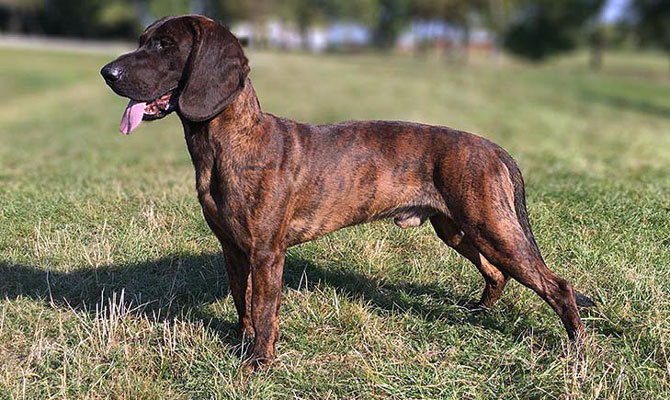 Jon Johnson Photo/Gila Herald: The Pima Police Department will receive a Hanoverian Hound trailing and narcotics dog like the one pictured here. The dog comes from Georgia K9 NTC and will cost $25,265.

“The big city is coming here, basically. We’re getting busier and busier.”

PIMA – Due to uptake in critical incidents and subjects fleeing from police, Pima Police Chief Diane Cauthen requested the town purchase a new tracking and narcotics detection K-9 officer for her department.

Cauthen made her request during Tuesday night’s Pima Town Council meeting, and the council unanimously granted her request to purchase a new trailing and narcotics detection dog from Georgia K9 NTC, based in Edisto Island, South Carolina, for $25,265. Half of the money is due upfront and half will be due upon completion of training.

“We have more and more people leading us in pursuits – jumping out and running,” Chief Cauthen said. “It would be nice to deploy a K-9 from a vehicle and track to where they’re at.” (sic)

Chief Cauthen told the council that she is also putting in for a grant for about $30,000 for equipment that would cover the cost but the grant is not guaranteed. Cauthen stressed that the dogs from the facility go quickly and recommended the council move forward with the purchase. Additionally, the town receives money from the state from the taxes on the sale of recreational marijuana and that money is used for anti-drug purposes. Pima Town Manager Vernon Batty said the town received about $8,000 from the fund last year and expects to receive about $10,000 annually.

Cauthen also told the council that when a person goes missing it puts a strain on the department because all hands are on deck, but the addition of a K-9 officer would alleviate that.

“If you call an officer and say there’s a missing child, officers come. But if we know we can deploy the dog and it can do the searching of nine officers, it’s kind of a peace of mind thing.”

Pima retired its previous K-9 Rosie in October 2021 due, in part, because Rosie was trained to detect cannabis as well as illegal drugs such as methamphetamine, heroin, and cocaine. Since Rosie did not differentiate a positive hit between the illegal drugs and the more recently legalized cannabis, any search could result in having charges thrown out by a judge. Thatcher’s K-9 officer, Apollo, is trained only on currently illegal drugs and Chief Cauthen said their new K-9 will be trained likewise.

The Hanoverian Hound pups begin trailing and narcotics detections training at 8 weeks old and the training lasts 10-12 months to complete, according to Georgia K9 NTC. Chief Cauthen said the new K-9 officer should be ready for duty by January or February 2023. The working span for a K-9 officer is about nine years.