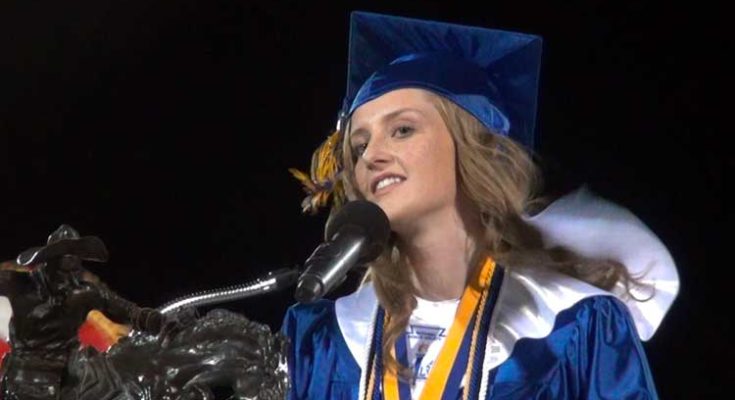 PIMA – With a flip of their tassels and some words of encouragement from their principal, the seniors of Pima High School took their first steps into adulthood Wednesday night as some of them made it a leap by flipping backward off the stage.

Pima graduated 53 students in a ceremony that was both refined and fun. It could be said that the Class of 2018 had class, and while some speakers reminisced of latter days of foolish endeavors that created havoc with their previous instructors, that was not prevalent Wednesday night as the group moved on to the next phase of their lives in style.

Valedictorian McCall Thygerson is set to attend Eastern Arizona College (EAC) prior to transferring to a university or technical school to become an occupational therapy assistant. She graduated with having already earned 28 college credits through dual courses with EAC.

“As we end this chapter in our lives, we are also ready to start a new one,” Thygerson said. “I know as the Class of 2018, we will go forward in greatness but also cherish our time as Pima Roughriders. We are the future, and tonight is only the beginning.”

Salutatorian Cassidy Brimhall plans to spend her next two years playing volleyball for EAC while getting her Associate’s degree in CADD. She then plans to transfer to Arizona State University to complete a Bachelor’s degree in architecture. She said as much as she dislikes endings, the ending of her high school career is just another beginning.

“There is a universal truth we all have to face whether we want to or not; everything eventually ends,” Brimhall said. “As much as I looked forward to this day, I’ve always disliked endings.”

“So, the time has come for us to close this book, but our life isn’t just one book, it’s a series. I promise that the next book is even better. It always is.”

Brimhall graduated high school with already having earned 40 college credits. In fact, most of Pima’s graduates earned college credits, with Ryne Lewis leading the way with 54. Lewis, who is a two-time state champion wrestler, will wrestle for Notre Dame College in Ohio on a wrestling and academic scholarship. He plans to study exercise science.

“I think we had a classy graduation,” said Pima High School Principal Cody Barlow. “I think the kids got to express themselves a little bit . . . They’re definitely a class full of personality. They’re really good kids. I hate to see them go, but I know they’re going to go on and do good things.”

See the Gila Herald’s Facebook Page for an album of photographs of the night.