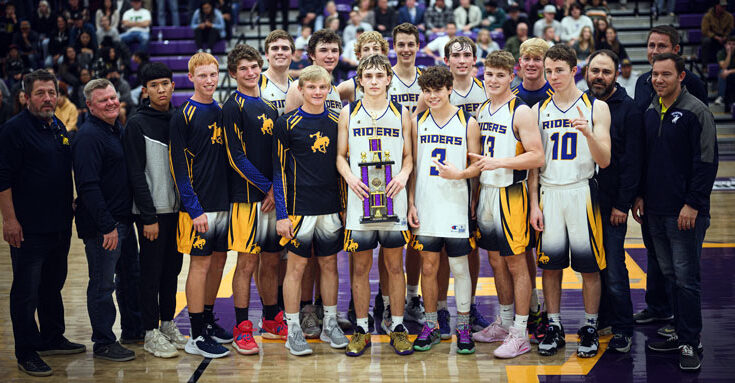 Steve Carter Photo/Special to the Gila Herald: The Pima Roughriders are the 59th annual EA Boys Holiday Basketball Tournament Champions with a 47-45 come-from-behind win over Thatcher.

The venue may have been in Thatcher, but the crowd was deafeningly pro-Pima at the end of the game chanting “defense, defense” loudly as the Roughriders clawed their way back past Thatcher.

The tourney championship match was the 11th between the two stalwarts of the Gila Valley, with each winning five apiece in the previous years.

Backed by the crowd, Pima held Thatcher to just 5 points in the fourth period to come back from a 12-point halftime deficit. The game came down to the last play, but in the end, it was the Roughriders who emerged victorious, 47-45.

“It feels good,” Pima head coach Cliff Thompson said. “I think we’ve been runner-up three out of the last four tournaments, so it’s nice to come out on the right end of one of these.”

Besides the game-winner, Russell was dominant down low and scored a game-high 20 points on 9-14 shooting from the field and 2-2 free throws to go along with 7 rebounds.

Points were hard to come by at the start of the game as the two teams felt each other out. It soon became evident that Thatcher wanted to slow the tempo down to limit possessions and get good looks at the basket in a half-court setup while Pima wanted to get out and run.

When in a half-court set, the Roughriders looked to use their size advantage over the Eagles by pounding the ball down low to Russell.

Thatcher’s Bradley Curtis got an offensive call against him early, nullifying his shot, and then sat for a good portion of the first period, forcing other teammates to pick up the slack.

Guards Brandon Napier (9 points) and Christian Carter (6 points) did just that, along with Brett Jones (7 points) and forward Cody Jones (3 points) who had to muscle up against Pima’s low-post players all game. After Napier and Carter hit on driving layups, Cody Jones split the defense and got the bucket and foul for an and-one play to put Thatcher up 15-12 after one period of play.

In the second period, Thatcher held Pima to just 6 points. Pierce Ashby had a put-back for one field goal and scored a layup on a fast break with an assist from his brother, Grant Ashby, on another. The third field goal was scored by Russell, who was the only Roughrider to score in each period.

The teams were tied at 18 in the second period when Bradley Curtis (18 points on 6-9 shooting plus 5-10 free throws and 7 rebounds)took over and Thatcher went on a 12-0 run to end to go into halftime up 30-18. Bradley hit from both baselines with a defender in his face and a 3-pointer.

Cody Jones corralled a loose ball and got it to Napier who drilled a 3-pointer just before the end of the second.

“I thought we did a great job in the first half of what our game plan was,” Thatcher head coach Kyle Hull said.

In the third, Pima went right back down low to Russell, who didn’t disappoint with 6 points in the period.

The difference was Pima turned up its defensive intensity which also got Grant Ashby going as he stole the ball from Napier and took it the distance the other way, bringing the score down to 34-38.

The Eagles countered with Bradley Curtis, who drove into the lane and hit a short jumper in the key to stretch the lead back to six at the end of the third period.

Then came the pivotal fourth where the Roughriders’ defense held the Eagles to just 5 points and only one field goal.

Then tournament MVP Garrett Curtis stepped up and hit a mid-range jumper to cut Thatcher’s lead to 41-45. A couple of possessions later while down 3, Curtis then blocked Thatcher’s Bradley Curtis in the lane for the turnover.

And on Thatcher’s following possession, Curtis (10 points on 4-8 from the field and 1-4 free throws, with 7 rebounds and 2 steals) grabbed the defensive rebound at one end and then set a screen at the other to free Russell. Coy Miller then hit Russell with a perfect pass and the big man easily put it in from 2 feet out to tie the game at 45-45.

Thatcher went back to Bradley Curtis, but Miller doubled down and picked his pocket from behind. The teams then settled and Pima appeared to set up its offense as Miller passed the ball to Russell near the top of the key. And with two Eagles in his grill, Russell hit the jumper to give Pima a 47-45 edge.

“They got on a little run,” Hull said. “We knew it was coming. We said, ‘we just have to weather the storm.’ And we weathered it as long as we could but we just didn’t have enough.”

With time running out and Thatcher down 2, Napier drove the lane but Pierce was there with the help defense to alter the shot and Garrett Curtis came up with the rebound.

After a foul to get up to the bonus, Pima was inbounding up 2 points with 11 seconds to play. The ball came into Russell, who was swarmed by two defenders. Thatcher didn’t get an immediate foul call, however, and Russell drove to the basket, where he was met by Cody Jones set to take the charge. The officials called an offensive foul on Russell, and Thatcher inexplicably had a shot to tie or win it, but they were going to have to go the length of the court in about 6 seconds.

Napier inbounded the ball to Carter, who immediately passed it back to Napier. He then found Bradley Curtis near mid-court, and Bradley took Russell on the dribble as he drove into the lane, where he was met by Pierce and Garrett. The three went high into the air and came down with the buzzer sounding and the ball falling short, however, another sound also soon rang out – that of the official’s whistle.

Bradley went to the free throw line down 2 with just 1 second left on the clock. After missing the first attempt, he purposefully missed the second free throw, but Grant Ashby secured the rebound and the victory for the Pima Roughriders.

“Well, we just wanted to try to get it in his hands – one of the two right, but we had a short six seconds I think and so you gotta move quick,” Hull said. “So, we need to get it down the floor and we got it to him – got it in the right guy’s hands. He was able to draw contact, (and) shoot the free throws. He’s a hooper. Short memory – move on. Bradley’s a hooper, so I don’t worry about him at all.”

Pima head coach Thompson said that playing in the atmosphere of the championship game will help his squad as they attempt a playoff run this year and praised the Eagles for their play.

“Thatcher played excellent,” coach Thompson said. “It could’ve gone the other way real easy. This should help us for the future. Playing in a game like this with this atmosphere is a lot of fun.”