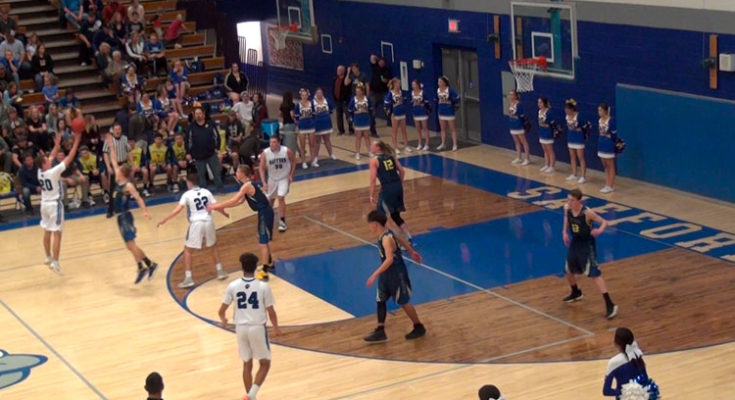 Jon Johnson Photo/Gila Herald: Safford’s Andrew Smith hits a deep 3-pointer against Pima. Smith left the game early in the third period with an apparent ankle sprain and Pima came back to win the game, 59-51.

SAFFORD – The Pima Roughriders came back from 13 down in the second period to beat the home team Safford Bulldogs 59-51 Thursday night. The Roughriders play in the 2A East Region and the Bulldogs are in the 3A South Region.

The No. 9-ranked Roughriders (14-9 overall, 8-3 region) used a lockdown defense to stop Safford’s scoring and clawed their way back through second-chance points off offensive rebounds and hitting their shots at the free-throw line.

Dawson Pruszynski and Hayden Ashby excelled in the frontcourt. Pruszynski led the scoring for Pima with 17 points and he and Ashby (8 points) cleaned the glass so well they should get a sponsor deal from Windex.

Alec Judd and Tim Salyer led the way in the backcourt with 13 and 11 points, respectively. Judd sunk 11-13 from the charity stripe, hitting his last six to put the game away.

The evening started out well for the No. 16-ranked Bulldogs (15-8 overall, 4-2 region) who excelled beyond the arc early on and took advantage of some lazy Pima passes to score in transition. After Andrew smith nailed a dart from the parking lot, Trett Wiltbank hit on a deep 3-pointer as well at the end of the first period to put Safford up 17-11.

In the second period, it was all about the Bulldogs’ big man Drew Cochran, who came alive after swatting Salyer on a drive early in the period. Cochran became money from deep and hit two 3-pointers to give Safford its biggest lead of the night, 27-14, halfway through the period.

“(In the) second quarter we got kind of turnover happy and Safford takes advantage of those types of things,” said Pima head coach Cliff Thompson.

“We try to tell the guys () persevere and when things aren’t going well we need to stick together really encourage each other and work hard and good things happen.”

Pima fought back by cleaning the glass and getting second-chance points from Ashby and Jake Whitaker. The Roughriders then began to share the ball well as well and Salyer had a nice dish to Ashby on a fast break off a Bulldogs miss and Ashby found Levi Thygerson open on the baseline. Thygerson’s jumper cut the lead to just 29-24 as the teams went into the locker room for halftime.

Misfortune struck the Bulldogs early in the third period as Smith tweaked his ankle when his foot came down on top of Thygerson’s on a drive to the bucket. Smith walked off the court with a slight limp and did not re-enter the game.

With Smith injured, Dom Gutierrez stepped up and scored on multiple drives into the lane. Gutierrez finished with a team-high 13 points with Cochran getting 12 as the other Bulldog in double figures.

The teams continued to trade buckets in the third as Salyer hit a big 3-pointer to bring the Roughriders within two points, but Jejdrique Chavez answered with a layup at the end of the period to stretch Safford’s lead back to four, 43-39.

Things got a little chippy in the fourth period as both Pruszynski and Chavez were called for technical fouls.

Pruszynski was dinged after hitting a game-tying putback. Dawson appeared to believe he was fouled on the play and vocally made his opinion known to the referee.

Chavez got his foul after slapping the ball out of Whitaker’s hands after the referee had blown play dead and called a jump ball. The ball then fell onto Gutierrez, who was lying on the court.

While Safford didn’t take advantage of the free throws, Pima ended up taking the lead for good after Judd nailed both shots to put the Roughriders up 50-49. Thygerson followed up with another baseline jumper and Chavez turned the ball over on an offensive foul call when Judd held his position and took a charge.

Still, the Bulldogs had their chance to tie but their 3-pointers rimmed out no good. In their last realistic chance to come back, Thygerson pried the ball out of Chavez’s hands and dove on it to get the jump ball to turn possession back over to Pima. Judd then sunk six straight free throws and Pima finished the comeback, 59-41.

In other Pima news, the Roughriders pounded the Willcox Cowboys 77-45 on Friday night. Pima will finish up its regular season at home against the No. 5 Thatcher Eagles on Thursday, Jan. 31, starting at 7 p.m.

In other Safford news, the Bulldogs blew out the Tucson Tanque Verde Hawks 67-44 on Friday night. The Bulldogs will travel to the Tucson Catalina Trojans on Tuesday, Jan. 29.

Even though Thatcher has more outright wins, both have 12 wins in games that count toward seeding, and since Thatcher has four losses in those same type of games and Morenci has only three, the Wildcats remain on top of the 2A East even though both teams have identical 9-1 region records with their lone loss being against the other.

The Apaches will next host the 1A East Regional Tournament starting at 2:30 p.m. on Tuesday, Jan. 29.