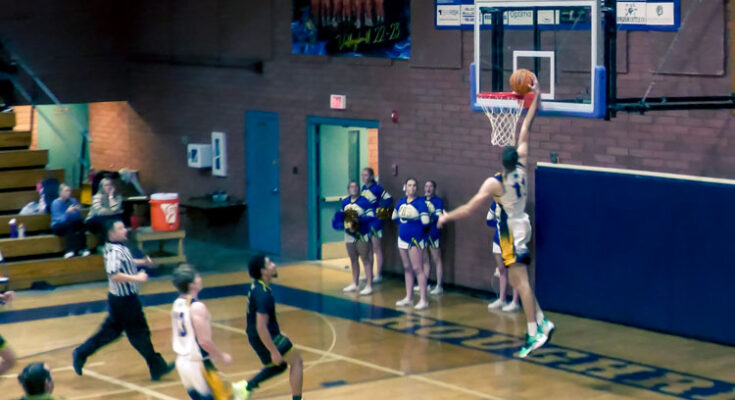 Jon Johnson Photo/Gila Herald: Pierce Ashby dunks the ball on a fast break in the first period against Tombstone. The Pima Roughriders were victorious 78-22.

PIMA – Time after time the Pima Roughriders went on the offense after a turnover to score on fast-break opportunities against the Tombstone Yellow Jackets on Tuesday, racing away with a 78-22 victory.

“I thought we played really well defensively – pressure defense,” said Pima head coach Cliff Thompson. “We wanted to get out and run and we did that.”

“We all played hard,” said Pierce Ashby. “We all hustled. We’ve been practicing all week to hustle and get down the court – move the ball around. And I think that’s what we did. We executed it very well.”

Defensively, Wyatt Wiltbank had a thieve’s night with six steals; and he converted them into points. Wiltbank had 9 of his 11 points in the game in the third quarter off fast-break layups from his steals, free throws, and a 3-pointer in the corner (3-3 shooting).

Reserve point guard Keegan Corona also played tough defense and had 2 steals to go with his 8 points on 3-6 shooting.

“Some guys really stepped up though,” coach Thompson said. “I thought Pierce played good defensively, and so did Wyatt Wiltbank. (He) did a really good job and had like five steals in six or seven possessions that they had, so he did a good job.”

Pima opened up a 16-5 lead after one-quarter of play by utilizing turnovers to attack the rim. They either got the bucket or free throws, or both, or, in the case of Pierce Ashby early in the first, a throw-down dunk to ignite the crowd.

But Pima continued to score at will in the second period behind plays from Grant Ashby and Coy Miller, who finished with 9 points on 3-5 shooting, to go into the break up 37-14.

The Roughriders kept on the gas in the third with a number of reserves in for most of the period as they scored 28 points while holding Tombstone to just 6. Wiltbank went off on his steals and scores, Grant threw one in from 3 and the Roughriders hit their free throws to extend their lead to 65-20 at the end of the third.

“Everybody did their jobs and everybody stepped up,” Pierce Ashby said.

The mercy-rule running clock shortened the fourth period, and Tombstone had just 2 points to show for it. Pima finished off the night with Riley Alder hitting a 3, and Corona and Preston Russell shooting free throws.

“We’re still early in the season,” coach Thompson said. “We’re going to a couple of tournaments the next two weeks after we play Bisbee on Friday and just trying to get better overall as a team.”

Safford (5-5) lost to the Amphitheater Panthers 58-75. The Bulldogs will next travel to face the Tucson Pueblo Warriors on Saturday, Dec. 17, at 2 p.m.