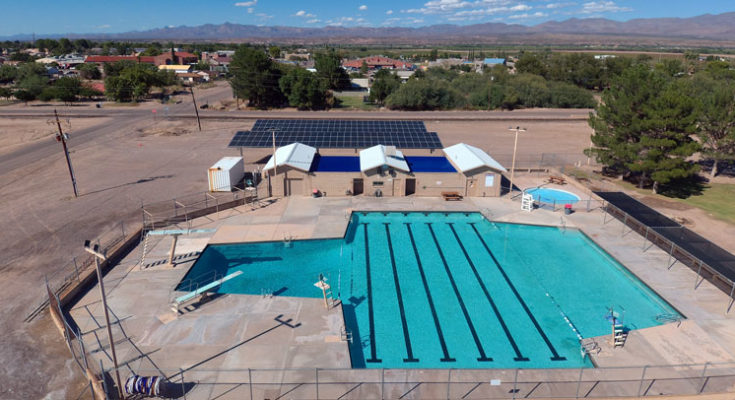 Jon Johnson File Photo/Gila Herald: A woman was found frolicking naked in and around the Pima Pool.

Also given additional charges of criminal damage and trespassing

PIMA – Users of the Blue Ribbon Park next to the Pima Pool received more of a view then they cared for the evening of Tuesday, May 26, when they noticed a nude woman frolicking in and around the pool.

Destiny Alexus Morgan, 30, was arrested and booked into the Graham County Adult Detention Facility on charges of indecent exposure, burglary in the third degree, criminal trespass in the second degree, and criminal damage.

The park users notified a town employee about the situation, who then alerted the police, which responded to the pool at about 6:34 p.m. The pool was locked and not open for business at the time of the incident.

Upon arrival, officers and town employees heard Morgan apparently talking to herself in the restroom. After the arrival of Pima Police Chief Diane Cauthen and other assisting officers, the pool gate was opened and the officers made entry to apprehend Morgan, who was still unclothed.

At that time, however, Morgan scaled the wall to the roof and began walking on top of the blue shades that cover the top of the restrooms. After going from the woman’s restroom side over the men’s restroom side, Morgan lied down on the shade. Officers then contacted her and told her to come down.

Morgan was then handcuffed and covered with a blanket. During her arrest, she gave several fake names and was speaking to people who were not there and not making any sense. A Thatcher officer who had arrived to assist advised that he had recently had a drug involvement with the suspect and she was identified as Destiny Morgan.

An inspection of the shade canopies found that they had been stretched out from Morgan walking on top of them and would cost $1,600 to replace.

Additionally, the following day, the guard shack was found to have been broken into and the lifeguards’ food in their refrigerator had been eaten. Personal property owned by several lifeguards was also found to be stuffed into a backpack that did not belong to any staff member and is believed to be owned by Morgan.

An officer attempted to interview Morgan at the jail and she allegedly advised that she had come to town to meet a guy and fell in love but didn’t listen to him. She said she had been homeless for two days and walked around without any food or water. She declined to identify the man she referred to and decided against answering any more questions without an attorney present.