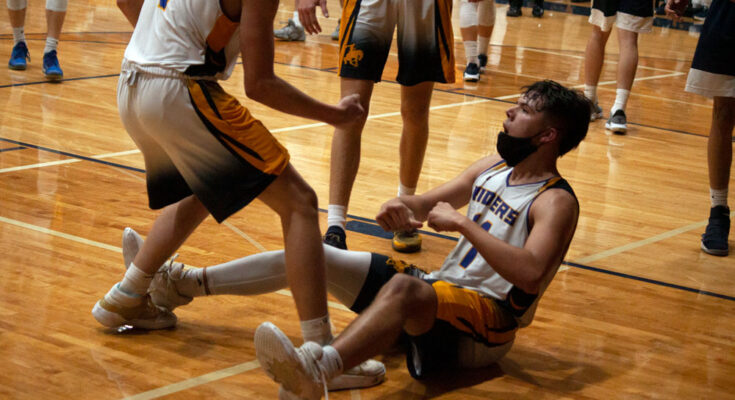 PIMA – Nolan Richardson had his “40 Minutes of Hell” with the Arkansas Razorbacks in the 1990s, and Benson boys basketball head coach Chris Taylor has “32 Minutes of Heck.”

The frantic, aggressive, full-court pressure paid dividends early against the Pima Roughriders, helping the Bobcats to a 23-22 lead late in the first period. However, Tim Salyer’s 3-pointer gave the lead back to the Roughriders, and they never looked back, winning 80-47.

Benson did platoon substitutions as part of his full-court press defense, sending in five fresh players at a time.

“This is all brand new,” Taylor said. “The kids are going to buy in, and it’s going to work out. It looks a little rough against probably one of the best teams in 2A, but we’ll be ok.”

Pima head coach Cliff Thompson countered the maneuver by using more of his bench early on as well.

“When I saw him doing that, I figured I better counter and try to keep our guys fresh because I didn’t want them to run us into the ground,” Thompson said. “We went nine deep in the first half and it worked out. I feel like we got our legs under us and maybe they slowed down a little bit after a couple of quarters.”

It’s said that defense wins championships, and it was Pima’s defense that shone brightly in the third period, keeping Benson scoreless for roughly the first five minutes of the second half. After scoring 23 in the first period alone, Benson could only muster 24 the rest of the game with 9 in the second period and 15 the entire second half (8 in the third period and 7 in the fourth). Conversely, Pima hit for double digits in the first (30), second (20), and third (24) periods, and put up 6 in the running-clock fourth period due to the enormity of its lead.

“We really want to stress coming out and playing well in the third quarter,” Thompson said. “It’s almost like the game starts again.”

Kenton Skiba led the team in scoring for the second game in a row with 20 points on six 3-pointers (four in the third period alone) and a fast-break layup. Scoring was balanced throughout the nine-player rotation, with Jacob Brimhall hitting 14 all in the first half – mostly off press-break layups – followed by Tim Salyer with 11, Grant Ashby with 10, Seth Russell with 9, and Kaleb Blair with 8. Reserves Reggie Steward, Garrett Curtis, Leland Thompson, and Coy Miller all scored 2 points apiece.

The press affected Pima early on, forcing turnovers that led to points for Benson. However, the team settled into its press break and started getting good layup looks for its big men down low.

“When we’re in the right spots, and we make the right reads, we’ll get layups like that, especially against a really strong press,” Cliff Thompson said. “The only way to counter an aggressive press is to be aggressive. And that’s what we do.”

The teams traded blows back-and-forth for a while until Salyer hit a big 3-pointer to have Pima go up 25-23 late in the first period. Salyer then orchestrated the ball down the court with only four seconds left in the period and got it to Kaleb Blair in the corner who hit the baseline 3-pointer as time expired, giving Pima a 30-23 lead after one period of play.

Benson would never get closer, and back-to-back 3-pointers from Skiba extended the lead to 12, 44-32, late in the second period. Salyer then hit two buckets, and Brimhall finished the scoring in the half to give Pima an 18-point lead, 50-32, heading into the break.

The defense then clamped down on Benson in the third period and Skiba caught fire with four 3-pointers and his first 2-point field goal of the season in the period. It was 74-40 at the end of three, and it was all she wrote for the Bobcats, as the running clock ended the game quickly, 80-47 in favor of the Roughriders.

“They’re really good, and we’re going to get a lot better,” Taylor said. “We got a lot more upside.”

In other boys hoops action:

For mobile users, slide left to scroll through the slideshow pictures.