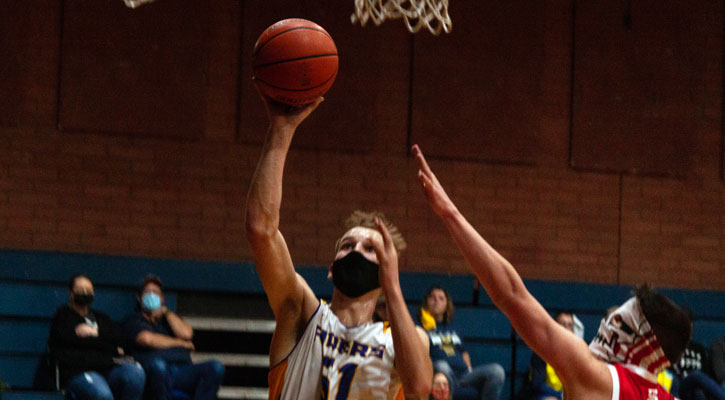 PIMA – The Pima Roughriders held on to defeat the St. Johns Redskins 51-45 on Saturday to claim the top spot in the 2A East.

“We knew what we were getting into when we came to Pima,” said St. Johns head coach Rusty Oakes. “They’re such a well-coached team. There’s really no weakness in their starting group and then they go off the bench four deep. All of them can play. We knew we had our work cut out for us.”

St. Johns got the initial scoring behind a bucket and foul shot by Cael Stewart, however, the Roughriders answered with three straight 3-pointers as their defense clamped down and led 14-7 after one-quarter of play.

The Redskins came roaring back in the second quarter aided by the Roughriders going cold from the field and being in the penalty bonus with 3:30 left in the half and cut into the lead.

“We got to 21 quick but then some of our guards got in foul trouble and we went kind of big and lost some of our shooting,” said Pima head coach Cliff Thompson.

After a not-so-often-seen goaltending call on Pima’s Seth Russell, St. Johns’ Brady Overson hit two free throws at the end of the quarter to cut Pima’s lead to just four, 23-19, at the half.

“I’ve got senior leadership who just refused to lay down,” Oakes said. “We never give up. We fight hard. Brady Overson – I’ll put him up against anyone in the state. He’s such a hard worker. Not only in a game – that’s easy – but in practice every single day.”

Overson, who went for a game-high 23 points, continued his barrage down low in the third quarter and followed a 3-pointer by Justus Burt with two straight buckets for a 7-0 run to start the third and give the Redskins their first lead in the second half, 26-23.

Overson was followed in the scoring column by Anthony Diamond with 10, Joseph Bushman with 4, Breaden Wall and Justus Burt with 3 each, and Parker Humpherys with 2.

Pima’s Kaleb Blair then stroked a 3-pointer to tie, but that was answered by a 3-pointer by St. Johns’ Preston Wilson.

“We got soundly defeated last year in the playoffs by Pima and it was a wake-up call as to how hard we were going to have to work to get up to the elite group,” Oakes said. “We’ve been working hard but boy it’s tough when you’re dealing with four dudes on the court who can all bang the three. But I’m proud of my boys. We worked hard and we stayed in that game.”

“I thought Kainoa Blair did a really good job hitting some 3’s for us in the second half,” Thompson said. “Jacob finished around the basket (and) Tim took really good care of the ball (and) distributed it for us. I was really happy with the way we came out because we could have rolled over pretty easy.”

Salyer led three Roughriders in double-digit scoring on the night with 14 points, followed by Blair with 12 and Brimhall with 10. Reggie Stewart hit a couple of big buckets to finish with 5, Seth Russell had 4, and Grant Ashby and Kenton Skiba both hit a 3-pointer for their scoring on the night.

The Roughriders closed out the fourth quarter book-ended with big buckets by Brimhall, including a reverse layup over Overson to give Pima a 49-42 lead with about a minute to play.

Overson continued to battle down low, however, and hit two more buckets to make it a four-point game with 9.3 seconds to play.

The Duncan Wildkats (1-1 region, 8-2 overall) defeated the San Manuel Miners, 50-20. Duncan will next travel to take on the Valley Union Blue Devils on Monday, starting at 5:30 p.m.

The Duncan Wildkats (1-1 region, 5-5 overall) lost to the San Manuel Miners, 22-35. Duncan will next travel to the Valley Union Blue Devils on Monday, starting at 4 p.m.